Originally born in Wisconsin, USA, Rebecca moved to the UK and completed a PhD with the University of Dundee.

Her first job as a Postdoctoral Research Assistant in New York saw her return to the USA. This was followed by a fellowship at the University of Southern California. Rebecca now lives in Harston, which is about 10 miles from Cambridge and has been with BAS for 6 years.

Having worked very much on her own and frequently having to move around with work, Rebecca wanted to settle in one location. BAS offered her the opportunity to do this work on some interesting projects as part of a multi-disciplinary team. Rebecca was also attracted to the long term prospects offered at BAS as well as the opportunity to continue with the polar research she began back in the USA.

Highlights of the Role:

“I carry out research on the factors influencing phytoplankton bloom formation and primary production in the Scotia Sea sector of the Southern Ocean. This involves going to sea on the RRS James Clark Ross (JCR) where I work with a group of scientists to measure a whole range of oceanographic parameters such as chlorophyll, salinity, temperature and light levels. I also carry out experiments to measure rates of primary production which involves using radio isotopes. At BAS Cambridge, I analyse the data collected from cruises and write scientific papers. This information may also be presented at scientific conferences.

The highlight of working at BAS is going to sea to carry out my research. We may get lucky and see some wonderful wildlife which sometimes comes very close to the ship! It’s also quite fascinating to see the huge icebergs that float around the Southern Ocean. Occasionally we get the opportunity to go ashore at the bases where the wildlife is amazing.

My job allows me to travel to other countries to attend conferences; earlier this year I attended a meeting in Hawaii. If I were doing the same job in an University environment, I would have to spend much of my time writing grant proposals and apply for funding to carry out my research. So for me, another one of the benefits of working for BAS is that I do not have to do this and can focus entirely on my science projects.”

Living and working in Cambridge:

Housing can be costly in the centre of Cambridge, which lead to Rebecca moving to a small village on the outskirts of the city. She is surrounded by fields of crops and horses which is very peaceful and she is able to cycle to work. 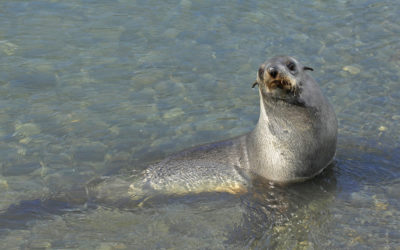