Chester moved from Tasmania, Australia, to join BAS in August 2005. He is completing a PhD in Invertebrate Phylogeography and has worked in the past as a Research Assistant for the Institute for Antarctic and Southern Ocean Studies.

“I have been directly and indirectly involved in Antarctic research for 5 years and had a fairly good understanding of the political motivations behind Antarctic research. I knew very little about BAS specifically but presumed it would be similar to the Australian Antarctic Division in its science, policies and bureaucracy.”

“Having spent the last 5 years studying various invertebrates, including Antarctic invertebrates, and with my background in Antarctic biology, I was keen to specialize in both these areas. The position I have unites these two interests with a more fundamental interest, that of evolutionary biology. I am particularly interested in the historical effects that shape contemporary distributions of populations and species.

My job is to examine a suite of invertebrate taxa, specifically the genetic variation that occurs within and between populations, species, and higher taxonomic units. Historical inferences are made possible by applying relatively new analyses that compare the sampled variation with a distribution of probable variation under different demographic and evolutionary models.”

“I have only recently started here, and most of my work to date has been troubleshooting. This troubleshooting can be quite fascinating, and overcoming problems can lead to interesting biological discoveries.

I have a challenging but extremely interesting project. The project leader is supportive and enthusiastic, and the people in the lab are helpful, interested and interesting.”

“I am not a city person, preferring a quiet rural existence. Cambridge is quite a small city and living a rural lifestyle is not only possible, it is quite economical. The city itself is steeped in history, and yet the old buildings are nicely contrasted with a young, vibrant student population. But, being a ‘outdoors’ person, I do miss the mountains, the bush and the ocean!”

“If you have an adventurous spirit and you want to join a well funded strategic scientific research organisation, then it would be hard to beat working for BAS.” 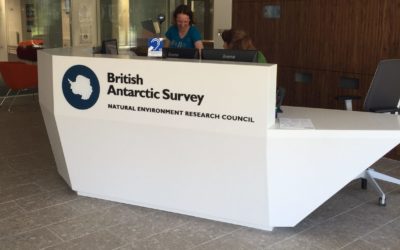