The BAS office in Stanley books all accommodation for BAS personnel transiting through Stanley – both South and North bound, and arranges transport to and from ships/aircraft. The Stanley Office is responsible for paying invoices for BAS ships, Stations and the BAS Air Unit, dealing with suppliers both FI and MOD, liaising with South American agents based in Punta Arenas, ordering and delivering fresh produce to the Dash 7 aircraft for Rothera and Halley. At the end of each Antarctic season the Logistics Coordinator arranges sale of surplus items from Stations.

BAS ships and aircraft transit through Stanley each Antarctic summer, as well as most of the BAS staff travelling to and from Antarctica. This amounts to upwards of 500 personnel each year. In addition, all Antarctic mail and the majority of freight transits through the Falkland Islands. BAS personnel requiring medical or dental assistance are supported, with appointments arranged and follow-up action taken as necessary.

RRS James Clark Ross and RRS Ernest Shackleton frequently call into the Falkland Islands to load and discharge cargo, berthing at either at Stanley or Mare Harbour Military Port. In addition to the BAS ships, the Royal Naval ship, HMS Protector, also supports the BAS science.

The ships’ berthing arrangements and work requirements are arranged by the Logistics Coordinator – this includes the removal of waste, sullage and provision of fresh water, cargo, Customs and Immigration, passengers, fresh food, official mail, arranging linesmen. On occasions there will be official receptions held onboard the ships, invitations for which are sent through the Stanley Office, liaising closely with the ships master. School visits to the ships are co-ordinated between the ships’ crew and the Stanley Office.

The Logistics Coordinator also supports BAS aircraft, dealing with all incoming and outgoing passengers, freight and mail. Customs clearance is arranged, and transport to and from Stanley airport for passengers. 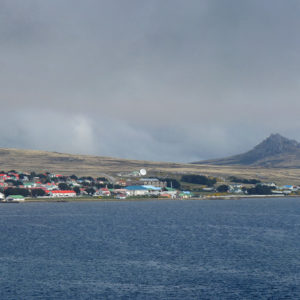