Deglaciation and climate of the Weddell Sea ice sheet

In the south of the Weddell Sea lies the Ronne and Filchner Ice Shelves. During the coldest part of the last glacial period about 25,000 years ago, the ice in this region may have been up to 1000 m thicker, and extended 400 km further to the north. This additional ice is likely to have reduced global sea level by around 6 m. We are investigating how the climate of this region changed moving forward from the glacial period through to the present, and how the ice sheet responded during the deglaciation and the current Holocene warm period which began around 11,000 years ago.

As the ice reduced in both volume and extent during the deglaciation, several geographic features known as ‘Ice Rises’ developed in the Ronne-Filchner Ice Shelf. These ice rises are independent ice caps. We believe some such as the Berkner Island (the largest at 350 x 150 km) may have only reached their current configuration in the past 4,000 years. Others such as the Korff may have only formed as independent ice rises in the past 1500 years, demonstrating the time it takes for the Antarctic ice sheet to respond to the warmer post-glacial climate.

To determine the climate and dynamic history of these ice rises, BAS uses a range of techniques such as radar to look at the structure and thickness of the ice, seismics to infer the type of bed beneath the ice, and ice core drilling for evidence of past changes in regional climate.

Understanding how past ice sheets have responded to climate change helps us to predict how ice sheets might respond in a future warming world. 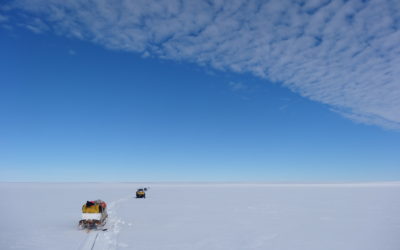