Meteorological scientists at Halley have been measuring the weather in great detail and with ever more sophisticated gadgets since the station first opened over 50 years ago. Instruments on the met mast include:

To the right is a Stevenson screen, housing an alcohol thermometer capable of reading down to -55°C along with a humidity probe and an electronic temperature sensor that take a reading every second.

Note: This instrument was temporarily moved to Rothera in 2017. Up on the roof of the science module is an instrument that looks a bit like some kind of anti-aircraft gun. It’s a sky radiometer: an instrument that measures the extent to which light from the Sun is scattered as it travels through the Earth’s atmosphere.

This allows us to calculate the size and density of the particles that are scattering the light (mainly things like sea salt, volcanic dust and man-made pollutants).

This scattering effect can vary – for example following a large volcanic eruption – and can have a major effect on climate by altering how much of the Sun’s radiation reaches the surface and how much is trapped once it gets there.

The POM is part of a network of similar instruments around the world. As the air at Halley is much less polluted than in more populous parts of the world, it provides a really useful comparison.

At the back left of the roof is a white box housing a laser. It fires a beam straight up and measures the time delay on the return beam to calculate the height of the clouds that reflect it. This is the main tool used by observers at Halley to help report cloud height as accurately as possible – not an easy task when you live on a flat ice shelf! 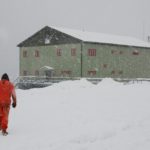 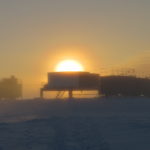 Halley Automation This innovative, multi-year, project aims to provide a micro-turbine power supply and datalink to a suite of autonomous scientific instrumentation around the Halley VI Research Station and on …