Sky-Blu has rapidly assumed a position of vital importance in support of BAS deep-field operations, because it can be used by Dash-7 aircraft. The greater freight capacity of the Dash-7 has provided fuel/load cost benefits in the support of deep-field parties, which were earlier undertaken exclusively by wheel-ski Twin Otter aircraft.

The groomed blue ice runway is up to 1.2km in length and 50 metres wide, permanently marked by flags.

The year-round main camp supports the runway, located 500 metres south-west of the runway apron. It comprises a ‘melon’ hut together with a number of tents, garage, food depot, radio aerial and toilet.

Sky-Blu is an area of blue ice situated close to Sky-Hi Nunataks suitable for use as an ice runway for wheeled aircraft.

Sky-Blu was first located by BAS in 1993–94. It became fully operational as a logistics facility in 1997–98 when an earlier high-latitude depot at Sky-Hi Nunataks was de-commissioned. 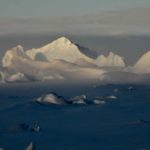 Greetings from Marie Byrd Land! The waiting is over….we finally arrived at our field site on 11th December, after a 4 hour flight from Sky Blu one of BAS’s fuel …