An international team of researchers has provided a new and unprecedented perspective on the climate history of Antarctica. From a sediment core collected from the seafloor in West Antarctica, they found evidence that around 90 million years ago the coastline was home to temperate, swampy rainforests where the annual mean temperature was ca. 12 degrees Celsius – an exceptionally warm climate for a location near the South Pole. The results are published this week (Wednesday 1 April 2020) in the journal Nature.

The team discovered fossilised forest soil, including a wealth of plant pollen and spores and a dense network of roots. The researchers conclude this warmth was only possible because there was no Antarctic ice sheet and atmospheric carbon dioxide concentrations were significantly higher than indicated by climate models to date.

The mid-Cretaceous, from ca. 115 million to 80 million years ago, is considered to be the age of the dinosaurs, but was also one of the warmest periods in the past 140 million years. Sea surface temperatures in the tropics at this time were likely as high as ca. 35 degrees Celsius, and sea level was possibly 170 metres higher than today. The new sediment core provides the first chance to reconstruct the West Antarctic climate during the warmest part of the Cretaceous, thanks to the unique evidence it contains.

The University of Bremen’s seafloor drill rig MARUM-MeBo70 collected the sediment core near the Pine Island Glacier on the German icebreaker RV Polarstern in 2017.

“During the initial shipboard assessments, the unusual colouration of the sediment layer quickly caught our attention; it clearly differed from the layers above it. Moreover, the first analyses indicated that, at a depth of 27 to 30 metres below the ocean floor, we had found a layer originally formed on land, not in the ocean,” says first author Dr Johann Klages, a geologist at the Alfred Wegener Institute (AWI).

Evidence of a swamp landscape rich in vegetation

CT scans of the sediment revealed a dense network of roots that spread through the entire soil layer of fine-grained clay and silt, and which was so well preserved that the researchers could make out individual cell structures. In addition, the soil sample contained countless traces of pollen and spores from various vascular plants, including the first remnants of flowering plants ever found at these high Antarctic latitudes.

Professor Dame Jane Francis, Director at British Antarctic Survey and a co-author on the paper says:

“This is an extremely exciting discovery for any scientist studying Antarctica’s past history. The presence of fossil roots in their original position of growth shows us that forests actually lived in this part of Antarctica at the time of the dinosaurs. The rocks indicate that this region was only 900 km from the South Pole, yet the presence of temperate forests means that the climate was much warmer than today, with natural levels of CO2 around 1000ppm.

It’s important for us to understand this region’s past climate if we are to predict the future of how Antarctica is going to respond to environmental change.”

The results of the vegetation analysis puzzled the researchers: under what climatic conditions could temperate rainforests have formed back then at a geographic latitude of roughly 82 degrees South? Even during the Cretaceous, the Antarctic continent was at the South Pole, which means the region where the forest soil originated was subject to a four-month polar night; for a third of every year, there was no life-giving sunlight at all.

Numerous analyses, one result: In the Cretaceous, Antarctica was ice-free and extremely warm

The outcomes of the various analyses fit together like the pieces of a puzzle: roughly 90 million years ago, there was a temperate climate just 900 km from the South Pole. The annual mean air temperature was ca. 12 degrees Celsius; in other words, back in the Cretaceous, the average temperature near the South Pole was roughly two degrees warmer than the mean temperature in Germany today. Summer temperatures were ca. 19 degrees Celsius on average; water temperatures in the rivers and swamps reached up to 20 degrees; and the amount and intensity of rainfall in West Antarctica were similar to those in today’s Wales. 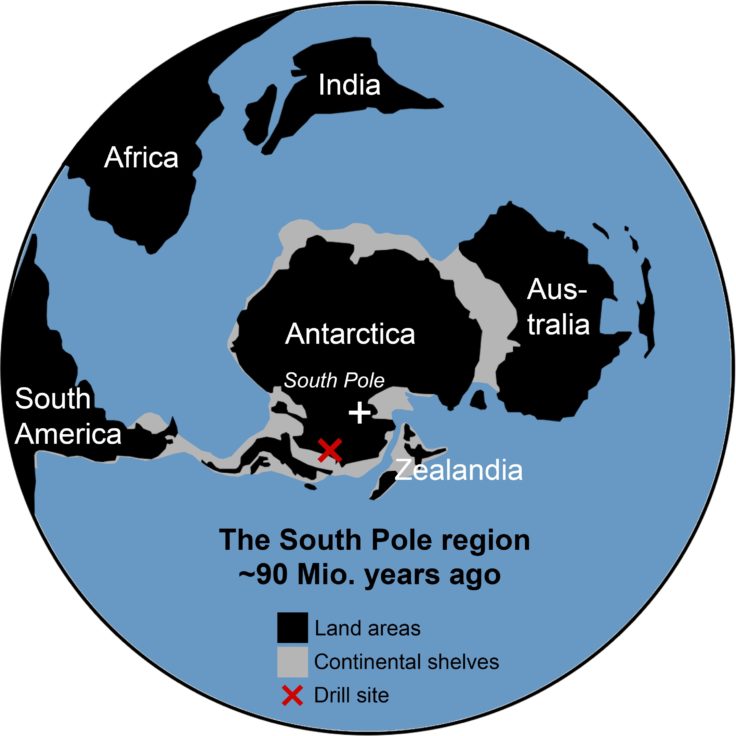 The big question now is: if it became so warm in the Antarctic back then, what caused the climate to subsequently cool so dramatically to form ice sheets again? “Our climate simulations haven’t yet provided a satisfactory answer,” says Gerrit Lohmann. Finding the causes of these tipping points is now a key challenge for the international climate research community.

“Our expedition has shown that drill rigs deployed onto the seafloor and remotely operated from an ice breaker are the way forward in drilling on polar continental shelves. Our research has demonstrated that they can open a window to unique climate archives for us, which have the potential to provide us with invaluable insights into the past and the possible future state of our planet.”

The sediment core analysed in the study was collected in the Amundsen Sea during the German polar research vessel Polarstern’s expedition PS104 (6 February – 19 March 2017). This was accomplished with the seafloor drill rig MARUM-MeBo70, which was developed at MARUM in Bremen and used for the first time in the Antarctic. The X-ray computed tomography (CT) scans were conducted at the Klinikum-Mitte hospital in Bremen.

The research project and Polarstern expedition PS104 as a whole were jointly financed by the AWI, MARUM, British Antarctic Survey and the UK division of the International Ocean Discovery Program (UK-IODP).

Team discovers sub-glacial lake from over 20,000 years ago