Making sense of our changing world

In a new report published this week scientists from leading UK and Norwegian research institutions highlight the urgency to further investigate the least understood regions on Earth.

Reporting in the State of the Polar Oceans 2018 researchers explain how decades of multi-disciplinary studies have advanced scientific knowledge about climate warming, biodiversity and conservation of marine life in the Antarctic and the Arctic.

“The polar oceans have long been amongst the least explored and least understood regions on Earth, yet they exert a profound influence over all of the planet. What happens in these oceans directly affect the lives of its inhabitants.  Recent advances in measurement techniques and our ability to create computer simulations of ocean processes gives us new insight into how they are changing.

“We are beginning to understand what those changes mean for climate, sea level, for the marine ecosystem as well as for humans and society.  This report highlights the state-of-the-art science behind those changes and their implications, and stresses the need for ongoing sustained observations of these key regions of the Earth System”.

Scientists know that the polar oceans control global temperatures, and have absorbed more than 90% of all the extra heat trapped in the Earth system since the industrial revolution began.

These oceans are warming significantly. Summer temperatures in the Arctic Ocean now 2–3°C warmer than the 1982–2010 mean, with a corresponding reduction in summer sea ice extent of nearly 50% from the late 1970s to 2017.

In the Southern Ocean around Antarctica the picture is more variable. The greatest increase in temperature has been recorded in the shallowest 2,000m of the sea, but this does not apply to the southernmost part of the ocean, where ongoing upwelling of colder, deeper waters is helping to maintain a more constant surface temperature.

The polar oceans sustain millions of seabirds, whales and fish, from penguins in the south to polar bears in the north, as well as providing food for a hungry world 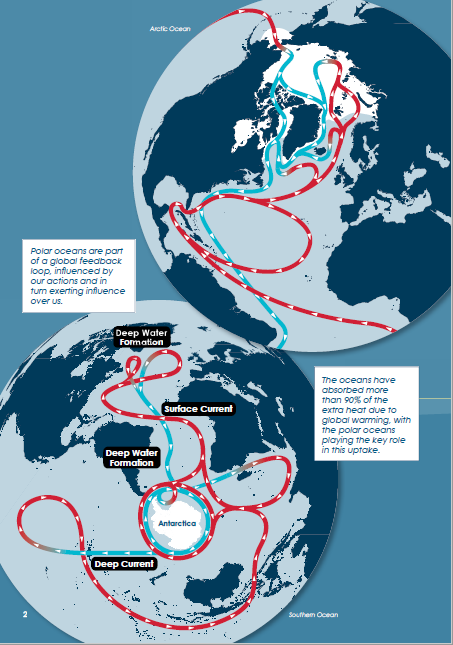 The international community is poised to take advantage of new state-of-the-art polar research platforms such as the RRS Sir David Attenborough and the Kronprins Haakon to continue to drive forward science that is critical for understanding the big questions about our global environment.