Teams from the US and UK have successfully completed scientific fieldwork in one of the most remote and hostile areas of West Antarctica – coinciding with the 200th anniversary of the discovery of the continent. This research will help scientists determine whether Thwaites Glacier may collapse in the next few decades and affect future global sea-level rise.

Thwaites Glacier, covering 192,000 square kilometers (74,000 square miles) an area the size of Florida or Great Britain, is particularly susceptible to climate and ocean changes. Over the past 30 years, the amount of ice flowing out of Thwaites and its neighbouring glaciers has nearly doubled. Already, ice draining from Thwaites into the Amundsen Sea accounts for about four percent of global sea-level rise. A run-away collapse of the glacier would lead to a significant increase in sea levels of around 65cm (25 inches) and scientists want to find out how quickly this could happen.

Five dedicated teams of scientists and engineers have been working on Thwaites Glacier for the last two months in below freezing temperatures and extreme winds. Two of these teams have used hot water to drill between 300 and 700 metres through the ice to the ocean and sediment beneath. The MELT team drilled two places beneath the glacier using hot water, including within two kilometres of the grounding zone, the area where the glacier meets the sea. The TARSAN team drilled at two locations about 30 kilometres further out on the floating shelf to explore the oceanographic conditions beneath the ice and the GHC team drilled four bedrock cores using a Winkie drill.

At the grounding zone site a series of instruments were fed through the borehole – including the small yellow under-ice robot, Icefin, which collected data on how the glacier interacts with the ocean and the underlying sediments.  In mid- January, Icefin swam nearly two kilometres from the drill site, right up to the Thwaites grounding zone, to measure, image, and map the melting and dynamics at this critical part of the glacier.  Another team (THOR) also extracted five metre-long cores of soft sediment by lowering a metal tube through the two holes in the ice and driving it into the muddy sediment below. This will reveal the past history of the glacier.

“We designed Icefin to be able to access the grounding zones of glaciers, places where observations have been nearly impossible, but where rapid change is taking place. To have the chance to do this at Thwaites Glacier, which is such a critical hinge point in West Antarctica, is a dream come true for me and my team. The data couldn’t be more exciting.”

Dr Keith Nicholls, an oceanographer from British Antarctic Survey and the UK lead on the MELT team says:

“We know that warmer ocean waters are eroding many of West Antarctica’s glaciers, but we’re particularly concerned about Thwaites. This new data will provide a new perspective of the processes taking place so we can predict future change with more certainty.”

“Thwaites Glacier is extremely remote, with only a handful of people setting foot on it until this year. This has been our first season of land-based fieldwork to get a deeper understanding of this important yet under-studied glacier. It’s amazing to think we’ve only now drilled in this remote region some 200 years after the continent was first sighted.”

“This is an exciting achievement by our researchers. We are leading the fight against climate change and UK researchers are at the forefront of investigating the impact of rising temperatures in Antarctica. The Government is making significant investments toward their vital work such as the impact of glaciers melting on future sea-level rise.”

Over 100 scientists and support staff are participating in the 2019/20 field season on Thwaites Glacier, which is situated some 1600 kms from both the UK’s Rothera Research Station and the US Antarctica Program’s (USAP) station of McMurdo.

The ITGC aims to improve future predictions of global sea-level rise from Thwaites Glacier in West Antarctica through a better understanding of the present and past context of ice-sheet dynamics. The project is a collaboration between the US and UK over five years at a cost of $50 Million.

The ITGC research teams have worked in Antarctica from November 2019 with fieldwork taking place until March 2020. Most researchers will travel through the US McMurdo research station, and then eastward to camps located near the Antarctic coast. The logistics are primarily hosted by the US Antarctic Program (USAP).

This austral summer is the second of four field seasons. Five of ITGC’s eight research projects will be deployed in Antarctica focusing on different aspects of the glacier and its environment. This season’s expeditions will undertake work for several ITGC projects: Geological History Constraints on the Magnitude of Grounding-Line Retreat in the Thwaites Glacier System (GHC), Thwaites-Amundsen Regional Survey and Network Integrating Atmosphere-Ice-Ocean Processes (TARSAN), Melting at Thwaites grounding zone and its control on sea level (MELT), Thwaites Interdisciplinary Margin Evolution—The Role of Shear Margin Dynamics in the Future Evolution of Thwaites Drainage Basin (TIME) and Thwaites Offshore Research (THOR).

Teams are staged at an existing camp on the ice called West Antarctic Ice Sheet Divide (WAIS Divide) while equipment is moved and surveys of surface conditions on Thwaites Glacier are conducted. Moving from WAIS Divide to six smaller research camps allows scientists to use a range of methods to investigate the region. The MELT team comprising glaciologists and engineers used hot water jets to drill through the ice at several sites, allowing them to deploy a suite of instruments, including the robotic AUV/ROV Icefin, to look at how the glacier interacts with the ocean and the underlying sediments. MELT and TARSAN are surveying the region using ice-penetrating radar and active seismic profiles. TARSAN is also using hot water jets to drill through the ice. They are also deploying multisensory stations called AMIGOS to study the ocean circulation underneath the floating ice shelf and the weather patterns to study the environmental factors that influence the structural stability ice shelf. MELT and TARSAN are surveying each region using ice-penetrating radar and active seismic profiles which provide key information on the shape of the ice and the ocean basin. A THOR researcher has retrieved a sediment core from beneath the ice through the holes drilled by the MELT and TARSAN teams.

Two teams representing the project GHC have been working in the Hudson Mountains and at Mt Murphy, where they are collecting rocks and using radar to collect data on past ice surface elevation changes.  The team in the Hudson Mountains will identify suitable sites for subglacial bedrock drilling to take place the following season. The Mt Murphy team have used radar and have drilled through the ice to collect rock samples that were covered by the ice sheet. A team representing TIME have been based at the Eastern Shear Margin inland from the coast, where they have used radar and passive seismics to survey the bed under the glacier at its eastern border.

This week, a research cruise set off from Chile on USAP’s Nathaniel B. Palmer, a US icebreaker bound for the Amundsen Sea, remaining in the area until March 2020. The expedition will support the THOR and TARSAN projects, which will survey and collect sediment cores from the seabed and tag seals to acquire ocean current and temperature data.  The scientists will not set foot on the glacier itself, but rather will study the output of the glacier and the ocean that it flows into—the sediments it drops to the ocean floor, the water temperatures under the glacier and more—in order to reconstruct the history of glacier changes in the area and to improve the reliability of the ice sheet models that are used to predict future sea level change. 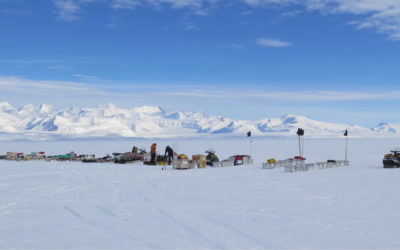