Most satellites orbit inside the Earth’s magnetic field, which acts as a protective shield.  However, bursts of energetic particles from the Sun and magnetic storms at Earth can increase radiation levels inside the magnetic field to dangerously high levels.  The last major magnetic storm occurred in 2003 and disrupted 47 satellites, including one scientific satellite costing $640 million, which was written off as a total loss.  However, much larger magnetic storms have occurred in the past, such as the Carrington super-storm of 1859.  If such a super-storm occurred today the cost of satellite disruption could be as high as $30 billion*.

The sun has an 11-year cycle of activity, which is measured by the number of ‘sunspots’.  The next peak in activity will occur over the next few years, but the number of large magnetic storms is expected to maximise up to two years later, at around 60 per year, between 2013 and 2015.  SPACECAST will have a warning system in place by March 2012, ready for the new peak in activity and ready for Galileo – the new European constellation of 30 radio-navigation satellites.

Professor Richard Horne at British Antarctic Survey is leading the project.  He says,

“Today we rely more than ever on satellites for TV, Internet, GPS navigation, communications and many other applications.  Space weather is a serious natural hazard and better forecasting is a priority for Europe.  This is especially important as we approach maximum levels of solar activity and increased numbers of magnetic storms. SPACECAST will provide forecasts of disruptive space weather events and issue warnings and alerts for periods of high risk.  It will deliver a forecasting capability that will continue beyond the lifetime of the project and lay the foundation for an operational system that will help protect our space assets.

“This initiative draws together an international team of scientists from the UK, Finland, France, Belgium and Spain and builds on four strong research collaborations with the USA.”

SPACECAST is a major EU initiative under Framework 7, which has funding up to a total of €2.5 million. It includes researchers from the BAS (UK), University of Helsinki (Finland), the Finnish Meteorological Institute (Finland), the Office for National Aerospace Research (ONERA) (France), University of Barcelona (Spain), the Catholic University of Leuven (Belgium), and, DH Consultancy (Belgium).  It also includes close collaboration with four groups in the USA, Los Alamos National Laboratory, the University of California, Los Angeles, NASA Goddard Space Flight Centre, and the Applied Physics Laboratory of Johns Hopkins University.

GALILEO is the joint project of the European Commission and the European Space Agency to deploy 30-satellites which will enable people to pinpoint their exact position or the location of any moving or stationary object to within 1m.

British Antarctic Survey (BAS), a component of the Natural Environment Research Council, delivers world-leading interdisciplinary research in the Polar Regions.   Its skilled science and support staff based in Cambridge, Antarctica and the Arctic, work together to deliver research that underpins a productive economy and contributes to a sustainable world.   Its numerous national and international collaborations, leadership role in Antarctic affairs and excellent infrastructure help ensure that the UK maintains a world leading position.  BAS has over 450 staff and operates five research stations, two Royal Research Ships and five aircraft in and around Antarctica. www.antarctica.ac.uk

Solar activity can trigger sporadic bursts of energetic particles and increase the number of high energy (MeV) particles trapped inside the Earth’s radiation belts. These high energy particles cause damage to satellites and are a hazard for manned spaceflight and aviation. They are difficult to predict due to uncertainties over the basic physical processes, and the need to access reliable data in real time. European space policy is committed to the Galileo radio-navigation system consisting of 30 satellites, the use of space assets to protect the security of its citizens (GMES), and a strong and competitive space industry. SPACECAST will help Europe to protect these space assets from all forms of space weather hazards, and especially now as solar activity will increase to a maximum over the next few years and will increase the hazard risk. 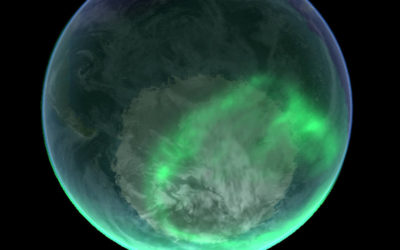