British Antarctic Survey (BAS) has decided not to winter at Halley VI Research Station for safety reasons. The station, which is located on the floating Brunt Ice Shelf in Antarctica, will shut down between March and November 2017.  Changes to the ice, particularly the growth of a new crack, presents a complex glaciological picture that means that BAS scientists are unable to predict with certainty what will happen to the ice shelf during the forthcoming Antarctic winter. As a precautionary measure BAS will remove its people before the Antarctic winter begins.

Halley VI station is in the final stages of being relocated 23 km from its present site to put it upstream of a previously dormant ice chasm that began to show signs of growth in 2012.

In October 2016, a second crack appeared some 17 km to the north of the research station.  Since then glaciologists have monitored the growth of this crack using a network of GPS instruments that measure the deformation of the ice, together with European Space Agency satellite imagery, ground penetrating radar, and on-site drone footage, which show that the recent changes to the Brunt Ice Shelf have not been seen before.  They have run computer models and created bathymetric maps to determine whether or not a large iceberg will calve, and the impact that could have on the remaining ice shelf.  They conclude that they are unable to predict with certainty what will happen to the ice shelf during the forthcoming Antarctic winter and beyond. 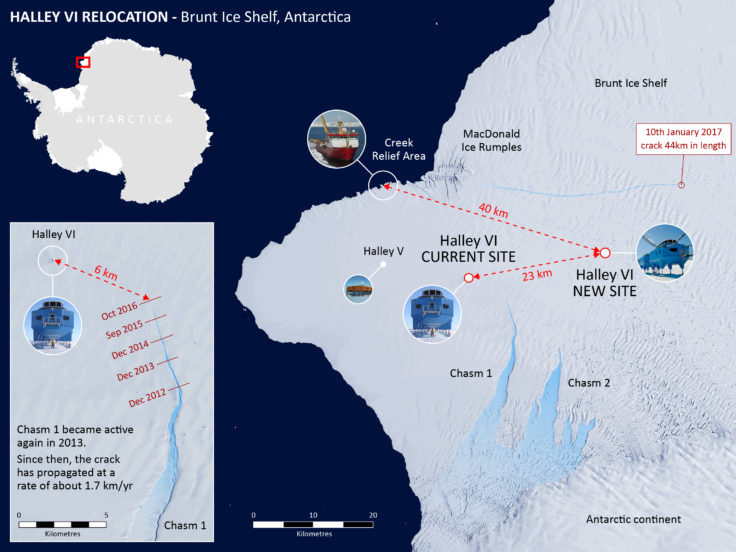 There is no immediate risk to the people currently at the station, or to the station itself.  However, there is sufficient uncertainty about what could happen to the ice during the coming Antarctic winter for BAS to change its operational plans.  BAS is confident of mounting a fast uplift of personnel during summer months if a fracturing of the ice shelf occurred.  However, access to Halley by ship or aircraft is extremely difficult during the winter months of 24-hour darkness, extremely low temperatures and the frozen sea.  The Director of BAS has therefore decided that it is prudent for safety reasons to shut down the station as a precautionary measure and remove its people before the Antarctic winter begins.  There are currently 88 people on station including summer-only staff working on the relocation project and 16 who were scheduled to over-winter.

Every effort is currently being made to ensure the continuity of long-term scientific data capture in these circumstances.  Options to temporarily redeploy research and technical support teams to other parts of BAS are being explored.

“Halley VI Research Station sits on a floating ice shelf.  It was designed specifically to move inland if required.  The current work to relocate our station is going very well.  This challenging engineering project is scheduled to complete as planned by early March 2017.  We want to do the right thing for our people.  Bringing them home for winter is a prudent precaution given the changes that our glaciologists have seen in the ice shelf in recent months.  Our goal is to winterise the station and leave it ready for re-occupation as soon as possible after the Antarctic winter.”

Halley VI Research Station sits on Antarctica’s 150-m thick Brunt Ice Shelf. This floating ice shelf flows at a rate of 0.4 km per year west towards the sea where, at irregular intervals, it calves off as icebergs. Halley is crucial to studies into globally important issues such as the impact of extreme space weather events, climate change, and atmospheric phenomena. It was ozone measurements at Halley that led to the discovery of the Antarctic Ozone Hole in 1985 — they are now being used to evaluate its recovery.

Long-term monitoring of the natural changes that occur in the ice shelf has revealed changes, including recent growth of a chasm that was previously dormant for around 35 years.  Preparatory work for the re-location was carried out during the 2015-16 Antarctic Summer season (Nov-March), and moving the station is almost complete.  This involved uncoupling the 8 station modules and using large tractors to transport each module further inland.

About closing the station for winter

Whilst BAS is confident of mounting a fast uplift of personnel during summer months if a fracturing of the ice shelf occurred the same cannot be said for winter.

Between now and early March science and technical teams will complete the relocation of the station modules and prepare them for winter and ready for recommissioning next season.  Remote instruments will continue to capture and store data about movement of the ice shelf.  A staged removal of summer-only personnel whose work on the relocation is complete is expected to begin in early-February.  All remaining personnel are scheduled to leave by early March.

About the re-location project

Watch footage of the crack