An animation of the giant iceberg that calved off the Pine Island Glacier in West Antarctica just over two months ago shows an unexpected break up.

Satellite images revealed a 100-square-mile iceberg calving from Antarctica’s Pine Island Glacier (PIG) in September. The calving event did not come as a complete surprise, but is a troubling sign for future sea-level rise. Scientists expected the iceberg to drift far out into the Southern Ocean before breaking up. However, it got stuck, probably impeded by thick sea ice, before it started to disintegrate into many smaller icebergs.

Dr Robert Larter, a marine geophysicist at British Antarctic Survey, who flew over the PIG rift last season during his research cruise with the German Alfred Wegener Institute, explains:

“What we’re witnessing on Pine Island Glacier is worrying. We’re now seeing changes in the calving behaviour of the ice shelf, when for 68 years we saw a pattern of advance and retreat resulting in the calving of a single large iceberg which left the ice front to approximately the same place. The calving of icebergs in 2001, 2007 and 2013 are well-documented. Each calving event returned the ice front to more or less the same position and the ice shelf flowed into the sea again. But with continuing thinning it was clear that sooner or later there would have to be a change to this pattern – and this is what we are witnessing now.

“What’s both interesting and of concern is the lines along which the iceberg has broken follow the pattern of crevasses developed in the ice shelf that it calved from. This change of behaviour might reflect the crevasses within the ice shelf having an increasing influence on the spacing and pattern of iceberg calving as a result of the thinning that has taken place over the past few decades.”

Pine Island Glacier is the fastest melting glacier in Antarctica—one that’s responsible for a quarter of the frozen continent’s ice loss, around 45 billion tons of ice each year. Satellite images taken since 26 September show an open-water gap emerging between the ice shelf and the iceberg, which is about two thirds the size of the Isle of Wight (103 square miles or 267 square km).

This calving is significant because, despite the fact that the ice shelf has been thinning for decades, until two years ago there had been no systematic retreat of the ice front since it was first observed in 1947.

Dr Larter continues: “If the ice shelf continues to thin and the ice front continues to retreat, its buttressing effect on PIG will diminish, which is likely to lead to further dynamic thinning and retreat of the glacier. PIG already makes the largest contribution to sea-level rise of any single Antarctic glacier and the fact that its bed increases in depth upstream for more than 200 km means there is the possibility of runaway retreat that would result in an even bigger contribution to sea level.” 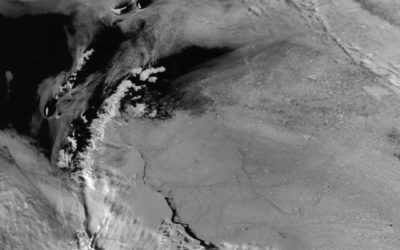