This year the extent of summer sea ice in the Arctic is heading towards being the second lowest on record. The Arctic sea ice minimum marks the day – typically in mid-September – when sea ice reaches its smallest extent at the end of the summer melt season. British Antarctic Survey sea-ice scientist, Dr Jeremy Wilkinson, provides a scientific perspective on the trend of rapidly decreasing Arctic sea ice.

The retreat of summer Arctic sea ice is unquestionable.  For over 35 years special satellite-mounted sensors, which can see through cloud and the polar night, have obtained daily ‘images’ of the entire Arctic region.  From these images, the extent of the sea ice has been accurately determined, year after year.  This data shows September sea ice has declined from over 7 million km2 in the 1970s to about 3.5 million km2 in 2012; a loss of about half the summer Arctic sea ice cover.

It is important to note that the reduction in Arctic sea ice is not expected to be constant from one year to the next. For example, a year with smaller ice extent could be followed by a number of years with a significantly larger ice extent. This is natural variability in action, and fully expected. However, the ice extent in the last four has been above than the 2012 minimum, but well below the long-term average but above the minimum; this is neither unusual nor unexpected.  More significant is the trend (the change over the entire time-series); which unquestionably shows a substantial decrease (see accompanying figures). Importantly, most climate models predict that the extent of the summer Arctic sea ice will continue to retreat over the coming decades; none show an increase.

Changes witnessed in the Arctic system are happening that only a decade ago would not have been thought possible. These changes have the potential, through complex linkages and feedback mechanisms, to influence all aspects of the Earth system.  As a consequence, Arctic change will have a significant impact on the livelihoods of Arctic residents, as well as considerable socio-economic implications at national, regional, and global levels.

Given the global consequences of Arctic change we have to ensure that the public, industry, national and international politicians and policy-makers have the most up-to-date and robust science available on Arctic change. Good policy decisions are based on rigorous scientific analysis.  The recent suggestion that Arctic summer sea ice is increasing since the 2012 minimum needs to be placed in context within the time-series available (see figures below).

Current research in the Arctic

Dr Jeremy Wilkinson from British Antarctic Survey has just returned from the Arctic Ocean where he was on board the South Korean research ship RV Araon, operated by the Korean Polar Research Institute. He was deploying a number of robotic instruments to continuously capture and communicate direct measurements from the ocean, sea-ice and atmosphere. He says:

“Given the extremely harsh environment in the Arctic the only practical way to ensure high quality, long-term measurements are obtained is through the use of technologically advanced systems.  These robots do away with the need for a human presence on the ice.  In a similar way that rovers gather data from us on Mars, we gather data on the sea ice here on Earth.   Data captured will help researchers, policy makers, industry and the general public to develop a better understanding of the current status of the Arctic marine environment.”

He observed that Arctic sea ice has changed over the course of a year. He says:

“We need stable ice to secure our instruments and what’s interesting is how in many areas we travelled, the ice looked thin, as though it was about to melt. Also, this year we can observe from the satellite images that there’s a big hole in the sea ice cover around Eastern Alaska and Western Canada. That’s highly unusual.”

“Arctic sea-ice is a critical component of our planetary system.  On a local scale it influences the weather, wildlife, and people who live in the Arctic.  However the significant reduction of sea ice over the years has been scientifically linked to a number of extreme weather events, but it is fair to say that the jury is still out regarding its impacts on global climate.

“Scientists are beginning to understand the local, regional and global effects of Arctic sea ice melt and Arctic change, but much work still needs to be done.  This is a hot topic for scientific research.” 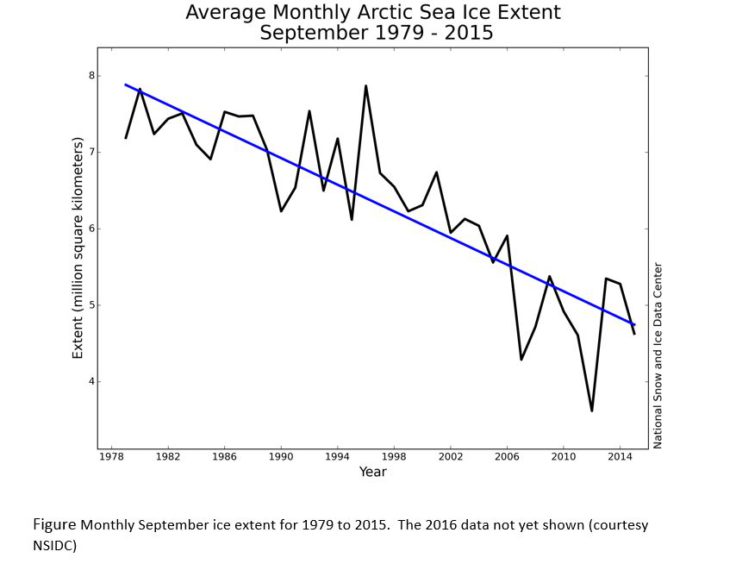 So what is the future for Arctic sea?

As global warming is on-going it is highly unlikely that the sea ice will recover to the levels scientists documented in the late 1970s and early 1980s.  This is because sea ice is highly susceptible to a warmer ocean and/or atmosphere, both of which are predicted to increase in temperature under global warming.  It is therefore most likely, and all climate models agree, that our children (and even ourselves) will be used to an ice-free Arctic in summer. 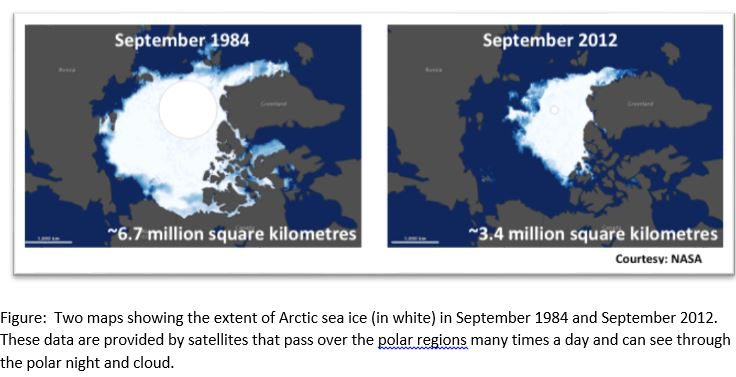 UK in the Arctic

The Arctic is an ocean surrounded by land and Arctic sea ice is the thin layer of frozen ocean water that forms and grows during the winter, and melts in the summer.

The Natural Environment Research Council’s Arctic Office, is hosted by the British Antarctic Survey. It supports UK research in the Arctic; provides advice to policy makers; and develops international scientific collaboration. The Office also manages the UK’s research station in the Arctic in Ny-Ålesund, Svalbard. Further information is here