This Antarctic season BAS scientist Dr Robert Mulvaney is taking part in the ongoing hunt for the oldest ice record Beyond Epica. Using a variety of different techniques, he and collaborators hope to identify the place where they believe ice cores going back 1.5 million years could be drilled. These cores would give us an unparalleled record of how Earth’s atmosphere and climate changed in the past, enabling us to better understand how future changes in our atmosphere would affect climate. Here Robert explains how his journey deep into Antarctica begins.

The journey into the heart of Antarctica to continue our search for the oldest ice record begins in Christchurch, New Zealand from where we take a Hercules C-130 flight bound for Mario Zuchelli Station, the Italian national Antarctic programme (PNRA) coastal station on the eastern edge of the Ross Sea.

We are required to fly in our Antarctic field clothing, so the departure lounge is full of people dressed as if for the field, wearing their “boarding cards” – a dog tag worn around the neck.

The plane lands on the sea ice (frozen sea water – about 2m thick) near Mario Zuchelli Station seven hours later. The sea ice is so smooth and hard that the aircraft can  land on wheels. The aircraft is actually chartered from Safair (South African airline). Cargo is  unloaded from the back of the aircraft by forklift truck.  The temperature here is about -10C.

However, things soon get much colder! My next flight, by Basla ski-equipped aircraft, takes me out to the French/Italian operated Concordia Station at Dome C.  The Basler is actually built on the airframe of a DC3 aircraft from the 1940/1950s (it’s the iconic aircraft at the end of the film Casablanca for example).

It is -41 degrees when we arrive at Concordia Station – which really is pretty cold. I’ve been out moving cargo this afternoon, and the air temperature is -36C, with a 15-20 knot wind that takes wind chill down towards -50C.  You don’t hang around outside for long.

Concordia is situated at around 3250m, but the low barometric air pressure in central Antarctica (typically around 635 mB at Concordia) means you experience an altitude of greater than 3800m.  For the first few days, breathlessness, headaches, dizzy spells and poor sleeping are common until the body starts to acclimatise by making additional red blood cells.

I’m here first, along with Dr Massimo Frezzotti, a scientist from PNRA, and Mr Michele Schalet, a vehicle engineer, because I need to set up the radar to head out and pre-survey this year’s BAS RAID drill site before we move the full team of six out to the site 40km from Concordia Station. The remainder of the Oldest Ice team will follow in a few days: Dr Julius Rix, an engineer from BAS, Dr Catherine Ritz, an ice sheet modeller from Grenoble, and Mr Saverio Panichi, an engineer who will support the drilling and also – importantly – double up as the chef for the team. This is going to be hungry work!

Watch out for the next instalment of the search for the oldest ice! Coming soon… 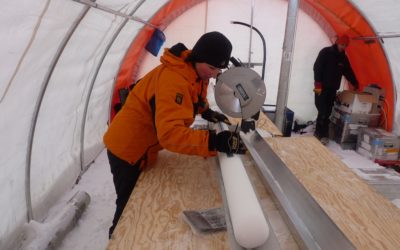 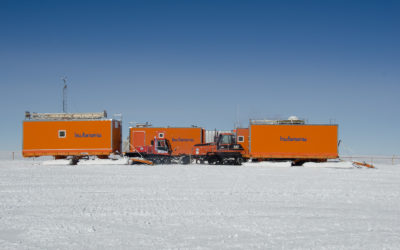 SCIENCE ON THE ICE – Part 2: Setting up camp at Little Dome C