Professor Martin Siegert from Imperial College London has just become one of the three new co-chairs of the Diversity in UK Polar Science Initiative Steering committee. In this guest blog, he talks about why anti-racism must be at the heart of climate action, and how we all have a responsibility to challenge both individual and structural inequalities in our environments.

Last year, the death of a Black man, George Floyd, in police custody in Minneapolis in the United States, made us consider how society is working, and why it is failing black, Asian and minority ethnic people. The UK Arctic and Antarctic Partnerships committee, which I chair, stands in support of the Black Lives Matter movement and its aims to end racism and violence against Black people everywhere. We recognise we are still largely white, middle-class and Eurocentric in our polar science community. This is a serious failing, which is why we fully support the Diversity in UK Polar Science Initiative and its work, and is why I am proud to be one of three co-Chairs to the group.

Climate change is the greatest threat to society

Climate change, most obviously recognised in the Polar Regions, is the greatest threat to our society, but what is the use of successful climate mitigation if our society remains fundamentally broken? Research, and in our case investigations of Polar Regions, aims fundamentally to improve all our lives – not a subset. Every person on planet Earth has a stake in understanding change in the high latitudes, and ensuring this knowledge is used to avoid dangerous potential futures. Maximising our chances of success requires us to seek, train and deploy talented people from the widest possible pool. We must all recognise the obstacles that act against inclusion and work much harder to build the research community necessary to address the questions we urgently need answers to.

Climate change is undeniably linked to social inequality with Black people and other communities of colour disproportionally hit by its impacts. Furthermore, Black voices are underrepresented in the polar science movement, as well as in climate and environmental science, even though a recent study showed that Black and Latinx people in the US care more about environmental issues than white people do. In my role as co-Director of the Grantham Institute at Imperial College, I was delighted to introduce Judy Ling Wong OBE as its 2019 Annual Lecture. Judy is a climate activist, artist and Honorary President of the UK’s Black Environment Network. In her lecture, she reminded us that action against climate change must be positive for all communities in their diversity, including all those who are disadvantaged.

As researchers, when we examine the societal changes likely under strong warming futures, such as the impact from sea level rise as a result of ice-sheet melting, we see the most disadvantaged saddled with higher costs and deepening inequalities. Changes observed in the Polar Regions will likely have severe consequences globally, but they will not be shared equitably. Similarly unfair consequences will follow from increasing floods, heatwaves, droughts and public health emergencies. Our aim must be to both prevent the most damaging of climate futures and to help reduce the impact of devastating events that we cannot change, which most often hit Black and other non-white people hardest, and commonly because of structural inequalities.

We must acknowledge the bulk of greenhouse gas emissions historically and at present, and likely in future, comes from the most wealthy and fortunate. The changes being seen the Polar Regions are a consequence of a rich, dominantly white, minority of people on our planet. We therefore support the case for climate justice – using the wealth created through polluting and environmentally destructive activities to help mitigate and adapt to climate change – as being essential for healthy societal development and ultimately protection of polar environments.

Listening is not enough

The long-standing issue of violent racism rearing again in the US, and protests around the world, remind us how important it is to listen and learn from people who are telling us there is a problem. And listening is not in itself enough – we must take decisions and make changes, even when doing so may make some uncomfortable in the short term. Like with climate action, the goal of anti-racism is to make the world a better place for everyone. That’s why those who have privileges based on their race or geography, have a duty to fully understand the changes needed to create a fairer world.

Judy Ling Wong compared the ‘beautiful’ diversity of nature with that of human beings, and urged people to connect with nature emotionally, saying, “We love what we enjoy, and we protect what we love.” Judy also challenged us to think about how many Black people do not experience easy or free access to nature, and those who have not yet had the opportunity to express or even develop their love of the environment because of systemic racism. When explained simply like this, we seem so far from a fair and equitable society in the UK.

Polar research will be stronger if it benefits from diversity

We must all see and celebrate the Black people whose contributions advance our understanding of climate and environmental issues and whose activism protects the natural environment. Polar research will be stronger if it benefits from diversity of thought and experience, enriching our knowledge and helping to develop more impactful solutions to tackling climate change.

We must also recognise our responsibility to challenge our own community with its past and current failings, some of which have been exposed and identified by the Race Impact Survey that the Diversity in UK Polar Science Initiative has reported on earlier this month. Unconscious bias is present in all decisions that we take, from the critical to the mundane, that collectively can amount to institutional racism. We must value diversity in all forms and levels and strive to make our community open and welcoming for everyone.

Dr Martin Siegert is Professor at Imperial College London and Chair of The UK Arctic and Antarctic Partnerships committee. At Imperial, Prof. Siegert FRSE has been the Co-Director of the Grantham Institute since May 2014. Previously, he was Director of the Bristol Glaciology Center at Bristol University, where he is now a visiting Professor, and Head of the School of GeoSciences at Edinburgh University, where he now holds an Honorary Professorship.

He led the Lake Ellsworth Consortium – a UK-NERC funded programme that designed an experiment to explore a large subglacial lake beneath the ice of West Antarctica. He has undertaken three Antarctic field seasons, using geophysics to measure the subglacial landscape and to understand what it tells us about past changes in Antarctica and elsewhere. 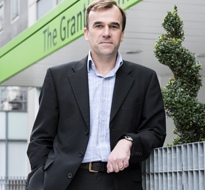