Diversity, Leadership and how to bring people on the journey with you – even to Antarctica

Ben Merrick, Her Majesty’s Commissioner for the British Antarctic Territory and Director of the Overseas Territories Directorate at the Foreign & Commonwealth Office, is registered blind. He acts as Deputy Disability Champion for the UK Civil Service, and he is one of the UK’s leading disability role models.

We are delighted that Ben will share the experiences of his journey on Friday 26 June, 10:00am-10:45am. In his talk, Ben will share from his rich experiences and will discuss the importance of diversity and inclusion in the workplace, as well as mechanisms to both address and overcome barriers. 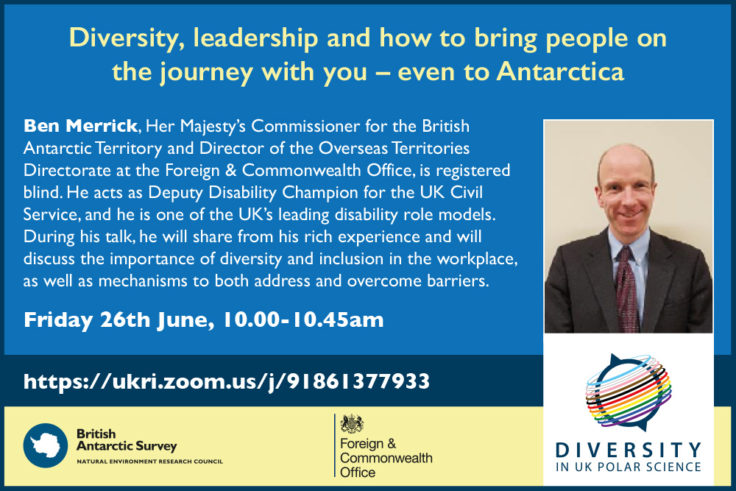 Ben Merrick has been the Director of the Overseas Territories Directorate (OTD) at the FCO since August 2017, as well as Her Majesty’s Commissioner for the British Indian Ocean Territory and the British Antarctic Territory. He joined the FCO in July 2015, on secondment from the Ministry of Defence (MOD), as Deputy Director for OTD, and oversaw the Falklands and Southern Oceans Department, Child Safeguarding Unit and programme delivery team as well as line-managing the Governors of Montserrat and St Helena.

Prior to this role, he was the Head of Arms Control and Counter Proliferation Policy in the MOD from January 2012, interim Head of the Defence Reform Unit September 2011 – January 2012, and Head of the Defence Acquisition Reform Programme from 2009-2011.  He also acted as one of MOD’s policy skills champions, after co-founding its Policy, Strategy and Parliamentary profession in 2012.

Before this time Ben had a series of roles in Defence policy and equipment acquisition, and also worked on secondment to the Social Exclusion Unit.

Ben is registered blind, so cannot read hard copy unless hugely magnified (he uses a voice synthesiser to absorb material on the computer), recognise people, or drive (though he did drive at 130 mph during a special driving session for his 21st birthday). He has made a considerable contribution to championing disability issues in the Civil Service, and currently acts as FCO’s main disability role model.

Ben gained a First at Oxford (the first blind person to do so) in French and Latin, and while at MOD gained the highest mark worldwide in the Association of Certified Chartered Accountants year-long Diploma in Financial Management. He also completed an executive MSc at the LSE in Diplomacy and International Strategy in 2014.

He lives in South West London with his wife Liz, daughter Hannah (9) and son Max (6) and enjoys showing them the world. He still enjoys long walks, reading, travel and cooking (he was featured on Radio 4’s In Touch cooking Thai Green chicken curry). He worked for 6 years in his spare time from 2001-7 as a volunteer counsellor at Childline, speaking to several thousand children over that period 1-1 on a wide range of issues, and in later years also training a large number of new counsellors (he appeared on Blue Peter after training one of their presenters). He worked as a community governor at a local primary school for three years, and has been a parent governor with responsibility for child safeguarding at his children’s school for the last three years.