Joe Corner, BAS Islands Project Manager, is currently overseeing the redevelopment of King Edward Point wharf on South Georgia Island in the Sub-Antarctic. The project will enable the new UK polar ship, the RRS Sir David Attenborough to berth at King Edward Point Research Station and support world-class science for the next generation. Here Joe discusses the first stages of building the wharf, including some challenges of constructing in one of the most remote areas of the world.

After 18 months plus of design, planning, procurement and biosecurity inspections, the King Edward Point Wharf construction team finally arrived on station in early January.  After initial inductions, we all sat back to watch our logistics ship, the MV Billesborg, turn the corner around Hope Point and slowly edge its way into King Edward Cove in South Georgia. After some careful maneuvering the ship finally berthed alongside the existing wharf and was secured.

The first major task was unloading 3500 tonnes of sheet piles, plant, equipment and general materials. Within two days, the crane was erected and materials were swiftly being moved about to make way for the next loads. Onboard the ship, Anna Malaos (BAS Environmental Manager) and Neil Goulding (BAM Environment Lead), were inspecting all of the kit to ensure it met the strict biosecurity requirements of the South Georgia and South Sandwich Islands Government.

After five days of cargo operations we were ready to really kick the project into gear. Within a few days the first ‘Spud Piles’ were driven, these allow the team to install, what are commonly referred to as ‘Christmas trees’, although they look nothing like them! These are used to support ‘piling gates’ which act as a jig to lift the 24m long piles into and help us ensure they are driven vertically into the seabed in the right place. Will Jones, our engineer (also the youngest on the team project team at the ripe old age of 24) set out the piles with the precision of an weathered site engineer with 50 years’ experience!

Following the installation of the temporary works we started to install the first piles in late January. With some precision crane driving by specialist Ronald Hardeman, we drove the first few piles with the diving team carrying out inspection dives around the old wharf. Some of the Antarctic Fur Seal pups seemed to find this interesting and decided to have a sniff about to see what these strange things were going for a swim in their neighborhood!

It’s not all work and no play at King Edward Point, our Station General Assistant Deirdre Mitchell organised a Burn’s Night Supper down at the boat shed. Along with the Station Chefs Valia and Sarah we dined on Haggis, neaps and tatties, accompanied by the traditional Burns night speeches.

I took it upon myself to produce a BBQ for the team which involved me making about 100 bread rolls and 80 burgers…all from scratch! On the 8 February Amber (Doctor) held the first quiz of the season, the victorious team taking bragging rights, until the next quiz night, was Lloyd Wickens (BAM Construction Manager), Neil Goulding and myself! We managed to get some of the team out on a boat trip to the Nordenskjod Glacier on a sunny calm Sunday to see the natural beauty South Georgia has to offer.

Find out more about the King Edward Point Modernisation  and follow #KEPWharf on social media for the latest updates. 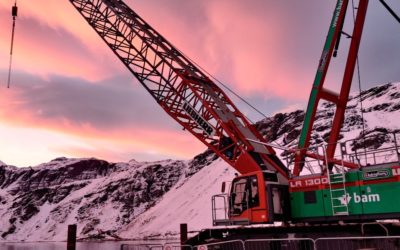