Whales and seals are the two groups of marine mammals to be found in the Southern Ocean, where they are an important part of the marine ecosystem.

Whales and seals of the Southern Ocean have been severely exploited by man in the past, but are now mostly protected. Some seals and whales have had dramatic population increases in recent decades, though others remain greatly reduced compared to pre-hunting levels.

The removal of millions of krill-eating whales and seals had a marked effect on the Antarctic marine ecosystem, and it may be centuries before a new equilibrium is reached.

There are two natural groups of whales: toothed and baleen. As their name implies, toothed whales have teeth; they mostly eat squid and fish, and take their prey one at a time.

Most, perhaps all, Southern Ocean whales are migratory, heading to warmer waters during the Antarctic winter. Calves are born in these more hospitable seas, as they would struggle to survive in polar waters during their first few months. The whales return south in the austral spring, following the receding ice edge, an area of high biological productivity that provides a rich feeding ground.

Toothed whales use ‘echolocation’ to navigate and find prey. They emit high-pitched clicks and sense them as they bounce back off objects.

The largest toothed whale is the sperm whale (Physeter macrocephalus) of Moby Dick fame. The group includes more than 60 other species, varying in size down to porpoises, one thousand of which would equal the body weight of a single sperm whale.

Between these two extremes are more than 20 species of beaked whale and many dolphins, of which the largest is ironically known as the killer whale (Orcinus orca) and preys on fish, penguins, seals and other whales.

The largest population of orcas seems to be in Antarctica where it is estimated some 160,000 animals range. They typically live to be over 50 years.

Orcas don’t make long, seasonal migrations, though they may cover an area of hundreds of miles in order to find seasonal prey. They can swim up to 30 miles per hour in short bursts.

Female orcas have a sickle-shaped dorsal fin, but in the male it is triangular and reaches almost six feet high. Orca pods have their own ‘dialect’ of discrete calls, which aid in navigation, detecting prey, or sensing danger.

The baleen whales, such as the blue whale (Balaenoptera musculus) and humpback (Megaptera novaeangliae), have fibrous plates of baleen instead of teeth, which they use to strain plankton and small fish from seawater.

The most numerous baleen whale is the Minke whale, a species that spends much of its time in the Antarctic near the ice-edge. The Minke was named for an infamous 18th-century Norwegian whaler who regularly broke the rules concerning the types and sizes of whales that he was permitted at that time to hunt. Soon all the small whales became known as ‘Minke’s whales’.

Minkes are the only baleen whale that is still hunted commercially. Japanese and Norwegian whalers kill a few hundred each year for scientific purposes and for meat. The Minke whale has a remarkable song that sounds very mechanical. This caused some problems for military sonar listening for submarines during World War II.

Minke whales (and orcas) are found near Halley and Rothera research stations.

There are also two natural groups of seals: true seals and eared seals, the latter comprising fur seals and sea-lions. In fact, all seals have ears, but ‘eared’ seals differ in having a small external ear rather than just a small aperture on the side of the head. At Bird Island, there are 65,000 breeding fur seals.

Depending on species, seals feed on fish and squid and/or krill. Thick layers of blubber beneath the skin of both whales and seals act as a food reserve and insulation. All Antarctic seals also have a layer of fur, giving additional insulation when they are hauled out on land or ice.

Weddell seals were named for the British Antarctic explorer James Weddell, who commanded British expeditions into the Weddell Sea (which is also named for him). They live farther south than any other mammal.

Weddell seals use their large, strong, forward-pointing canine teeth to chew breathing holes through cracks in the ice. They can dive over 2,000 feet deep and stay submerged for over an hour. They also have excellent eyesight, allowing them to navigate effectively in the dim light beneath Antarctic ice shelves.

The leopard seal is the largest of the true Antarctic seals and is the only seal that eat other seals. Leopard seals have excellent senses of sight and smell under water. They catch penguins by their feet and then beat them back and forth on the surface of the water to skin them. They then eat the carcass.

Antarctic fur seals (Arctocephalus gazella) and elephant seals (Mirounga leonina) are both found north of the pack-ice zone and breed in dense colonies on beaches. Here, dominant males (bulls) maintain harems of females (cows) in territories. In constantly defending these, bulls will not forage at sea, relying instead on blubber reserves laid down in the previous winter.

All seals breed annually and the timing of pup production and associated behaviour is linked to habitat and ecology. Mating occurs after pupping, though a fertilised egg will not implant in the uterus until later in the year.

Several varieties of seals are found at: 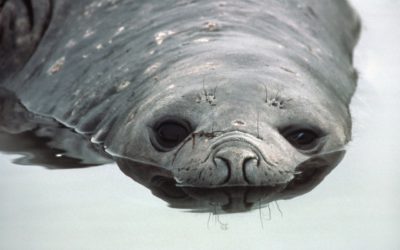