Albatrosses — legendary protectors of seafarers — are heading for extinction. Biologists have discovered that swordfish, tuna and other fishing fleets are killing more that 100,000 of these birds every year. In a couple of decades many species may be wiped out unless urgent action is taken.

The wandering albatross is the largest of seabirds, with a wing span reaching three metres and a body mass of 8–12kg. All species of albatross lay a single egg, several species breed only every second year and most take 10 years to reach sexual maturity. They have very long lifespans, with some individuals living to over 60 years of age. But many are now being killed off before they can reach half that age, and as a result populations are in rapid decline. Albatrosses have one of the lowest reproductive rates of any bird.

Albatrosses cover huge distances when foraging for food, even during breeding, with the foraging ranges of most species covering thousands of square kilometres of ocean. The largest of albatrosses, the wandering albatross (Diomedea exulans), ranges from sub-tropical to Antarctic waters on trips covering up to 10,000km in 10–20 days. It arrives in November to breed in loose colonies on flat grasslands, giving plenty of room for its spectacular displays. It lays eggs in December, chicks hatch in April and are reared throughout the winter (on a diet of fish and squid and carrion) fledging in November and December. Successful parents then take a year off, migrating to feeding areas all around the Southern Ocean.

Outside the breeding season, most species migrate long distances, some (like wandering and grey-headed albatrosses) travelling right round the Southern Ocean. While at sea, birds can travel 1,000km in a single day, with one grey-headed albatross recorded as circumnavigating Antarctica in just 46 days.

The four species breeding at South Georgia represent all three of the southern hemisphere genera. Only one, the black-browed albatross (Thalassarche melanophris), breeds annually, occurring in large colonies on hillsides, taking 5.5 months from egg-laying to chick-fledging, feeding its chick on a diet mainly of krill, and to a lesser extent fish and squid. This is obtained chiefly from the shelf waters around South Georgia and the South Orkney Islands. After breeding, birds migrate to South African waters.

Its close relative, the grey-headed albatross (Thalassarche chrysostoma), breeds only every two years on steep coastal slopes. The light-mantled sooty albatross (Phoebetria palpebrata) is also biennial and breeds solitarily or in very small groups on cliffs. Both these species feed mainly on squid and krill.

The populations of all these species at South Georgia are decreasing. The decline of wandering albatrosses is primarily due to their being caught on baited hooks set by tuna longliners in temperate and subtropical waters. The albatrosses try to eat the bait and get dragged under and drowned. Most other species are also killed by longliners, and recently it has become clear that collisions with trawl net cables are an additional, and potentially worse, source of mortality.

Much of the damage is caused by illegal fishing, which accounts for many thousands of deaths each year. However, a range of measures are currently in force to try to reduce the number of albatrosses being killed. These include:

In the Antarctic, albatrosses are found near BAS operations at Bird Island and Signy research stations. 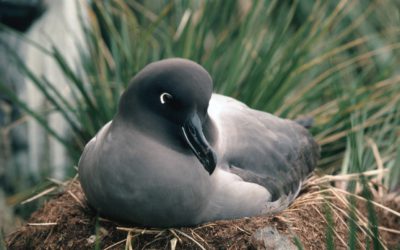