Antarctica occupies a privileged position from which to observe and measure all parts of our atmosphere. Knowledge of how it works is becoming increasingly important to how we live our lives today, both in weather forecasting and in communications via satellites.

The British Antarctic Survey has a dedicated team of engineers and meteorologists who live all year round at Halley and Rothera Research Stations in the Antarctic to look after experiments designed and used by a research team of over 60 scientists and engineers at BAS in Cambridge. 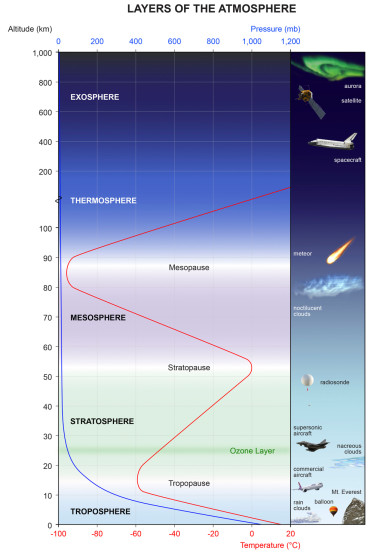 The lowest part of the atmosphere, from the ground to about 12 km altitude. This is where the weather takes place, where there is moisture and where there are living things.

12–50 km above the earth, above the clouds and at the cruising altitude of airliners, lies the stratosphere. It contains the ozone layer that protects us all from harmful ultraviolet (UV) radiation from the Sun.

BAS scientists first alerted the world to a deepening ozone hole over Antarctica, with consequent increases in levels of UV radiation and hence greater risk of skin cancers.

Between 50 and 85km altitude lies the mesosphere, which was once dubbed the ignorosphere because of the difficulties in exploring it! Now, modern lasers, radars and sub-orbital rockets are being used to discover more of its secrets, including the highest clouds and the lowest temperatures anywhere on Earth.

85 to 1,000km above the earth lies the ionosphere (made up of the Thermosphere and Exosphere), at the frontier to space and at the orbital altitude of the space shuttle, International Space Station, and polar orbiting satellites used for mobile phone communications and remote sensing of the Earth. The polar ionosphere forms nature’s TV screen for the aurora — a dancing display of rays, curtains and spirals of red, green, blue and white light. The aurora is caused by the precipitation of charged particles from space towards the magnetic poles that is driven by plasma winds and magnetic storms from the Sun, known collectively as space weather.