Following a call for suggestions that sparked global interest, Royal Research Ship Sir David Attenborough has been selected as a name that captures the ship’s scientific mission and celebrates the broadcaster’s contribution to natural science.

The decision to name the ship after Sir David Attenborough comes only days before Sir David’s 90th birthday and is in recognition of his legacy in British broadcasting, inspiring a love of the natural world over generations. In a career spanning six decades, Sir David has presented critically acclaimed wildlife documentaries on the BBC including The Blue Planet, Planet Earth and Frozen Planet.

Reflecting the global interest that the campaign drew, Jo Johnson has also confirmed the popular suggestion Boaty McBoatface will live on as the name of one of the high-tech remotely operated sub-sea vehicles.

“The public provided some truly inspirational and creative names, and while it was a difficult decision I’m delighted that our state-of-the-art polar research ship will be named after one of the nation’s most cherished broadcasters and natural scientists.

“This vessel will carry the Attenborough name for decades to come, as it fulfils its mission to explore the oceans and put Britain at the forefront of efforts to preserve our precious marine environment.

“The ship has captured the imaginations of millions, which is why we’re ensuring that the Boaty name lives on through the sub-sea vehicle that will support the research crew, and the polar science education programme that will bring their work to life.”

“I am truly honoured by this naming decision and hope that everyone who suggested a name will feel just as inspired to follow the ship’s progress as it explores our polar regions. I have been privileged to explore the world’s deepest oceans alongside amazing teams of researchers, and with this new polar research ship they will be able to go further and discover more than ever before.”

Building on the interest in polar science generated by the naming process, Jo Johnson has also announced today that the Government will be investing up to £1 million in a new Polar Explorer Programme to engage young people and inspire the scientists, engineers and explorers of the future.

The £200 million ship, being built in the UK on Merseyside, is due to set sail in 2019. Tonne for tonne, it will provide the UK with the most advanced floating research fleet in the world, conducting vital research into the world’s oceans and how we address climate change.

As the biggest commercial shipbuilding contract in Britain, the construction of RRS Sir David Attenborough is supporting 400 jobs and 60 apprenticeships.

“We are delighted with the name RRS David Attenborough. He is an important public figure who has engaged and inspired the public over generations with his passion for the natural world. This new ship will be at the forefront of polar science and deliver world-leading capability for UK research in both Antarctica and the Arctic.”

The decision to name the ship was taken by Government following a public call for ideas led by the UK’s Natural Environment Research Council (NERC). The search for a name attracted over 7,000 suggestions. Sir David Attenborough’s name was one of the top suggestions with over 11,000 members of the public supporting it and was chosen on the basis of his career as a broadcaster and natural scientist. Boaty McBoatface topped the list with over 124,000 votes and, in recognition of the public interest, it will be used as the name of one of the ship’s high-tech remotely operated sub-sea vehicles.

Polar research has a history of unearthing vital scientific breakthroughs. British Antarctic Survey scientists’ discovery of the ozone hole in the 1980s, following many decades of monitoring, was crucial to the Montreal Protocol, one of the most successful international agreements ever. BAS scientists were not only leaders in monitoring stratospheric ozone but also made important breakthroughs in understanding the atmospheric chemistry that led to ozone depletion. Our continued investment in ozone research still provides abundant evidence for policymaking.

Once ready in 2019, the ship will be deployed in both Antarctica and the Arctic, and will be able to spend up to 60 days in sea-ice at any one time to let scientists gather extended observations and data. The ship will also be the first British-built polar research vessel with a helideck, will open up new locations for science and will be one of the most sophisticated floating research laboratories working at the poles.

Robotic submarines and marine gliders including the Boaty McBoatface sub-sea vehicle will collect data, images and samples relating to ocean conditions and marine biology and deliver it to scientists working in the ship’s onboard laboratories. Airborne robots and onboard environmental monitoring systems will provide detailed information on the surrounding polar environment.

The Government will invest up to £1 million in a new “Polar Explorer” programme to inspire the scientists, engineers and explorers of the future.  The programme will run over the next four years. The programme will use the construction and launch of the ship to engage young people through the science, mathematics and engineering associated with the vessel.

The programme will be led by STEM Learning Limited, building on the experience of their successful Tim Peake Primary Project. STEM Learning will work in partnership with NERC and STEM Ambassadors to reach out to schools, teachers and young people. 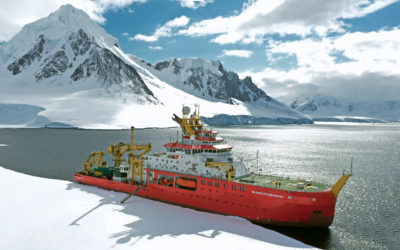 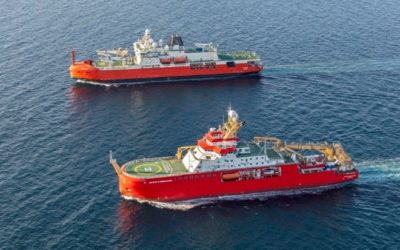