An enormous iceberg has calved from the western side of the Ronne Ice Shelf, in Antarctica. The iceberg, newly named A-76, measures around 4320 sq km in size and is floating in the Weddell Sea – currently making it the largest iceberg in the world. The calving is considered a natural event and not attributed to climate warming.

The ‘megaberg’ was spotted by British Antarctic Survey (BAS) researchers in recent images captured by the Copernicus Sentinel-1 mission on the Polar View portal. The iceberg is around 170 km in length and 25 km wide, and is slightly larger than the Spanish island of Majorca or the UK county of Somerset. 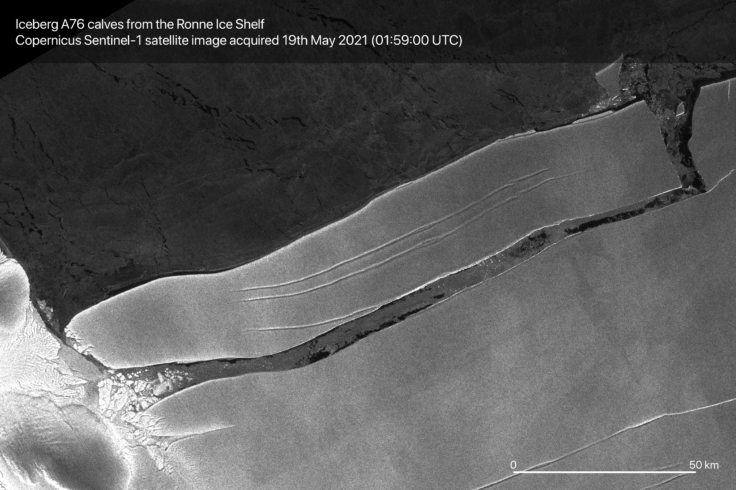 The enormity of the iceberg makes it the largest in the world, taking first place from the A-23A iceberg (approximately 3880 sq km in size) which is also located in the Weddell Sea. In comparison, the A-74 iceberg that broke off the Brunt Ice Shelf, near Halley Reseach Station in February earlier this year, was only 1270 sq km.

The iceberg was confirmed by the US National Ice Center using Copernicus Sentinel-1 imagery. The Sentinel-1 mission consists of two polar-orbiting satellites that rely on C-band synthetic aperture radar imaging, returning data regardless of whether it is day or night, allowing year-round viewing of remote regions like Antarctica.

Icebergs are traditionally named from the Antarctic quadrant in which they were originally sighted, then a sequential number, then, if the iceberg breaks, a sequential letter.

“Calving is an essential way for ice shelves to stay in balance. Large calving events only occur occasionally, and they can be very dramatic, but they are not necessarily a sign that the system is changing. There is currently no evidence that the Ronne Ice Shelf is calving more often as a result of climate change.”

Dr Alex Brisbourne, a glaciologist at BAS, has worked on the Ronne Ice Shelf. He says:

“Iceberg A76 is huge, about the size of the county of Somerset in the UK. It wouldn’t make the top 10 list of the biggest known icebergs of all time though. This calving is part of the natural cycle of the Ronne Ice Shelf. The ice shelf is constantly being fed ice from the Antarctic continent, and eventually chunks break off the ice shelf in this way, forming these big flat icebergs and maintaining a balance. Because they are already floating, as they melt, icebergs do not contribute to sea level rise in a significant way. They have been known to eventually get stuck in places like South Georgia in the South Atlantic, disrupting the feeding of seals and penguins.

“We know that the ocean around Antarctica is warming as a result of global heating but the Weddell Sea, where iceberg A76 sits, is not currently experiencing this warming. Elsewhere around the Antarctic continent however, the warming ocean is melting other ice shelves and this is allowing the ice to drain more quickly off the continent, increasing the rate of sea level rise. Of course, this sea level rise isn’t restricted to Antarctica, it affects sea level around the world, including here in the UK, increasing the frequency and severity of storm surges and coastal flooding.”