In a series of papers published this month (June) in the international journal Marine Genomics a team of young PhD researchers from across the EU describe how they apply novel biotech techniques, from biomimicry to population genetics, to explore the environmental and commercial issues facing the shellfish industry – worth in excess of an estimated €526 million a year.

This is the most comprehensive study of shellfish produced by young researchers as part of an EU project the Marie Curie Initial Training Network (ITN) partnership known as CACHE.

One study of the proteins in clams highlights that their shells are not only used for protection but might also help with their immunity.  Another looks at how discarded shells from the aquaculture industry, of which there are around 6-8 million tonnes per year, could become a valuable commodity if used for oyster reef reconstruction programmes or large-scale carbon sequestration techniques.

“There is still much to learn about shellfish and how they make their calcified shells which are unbelievably strong. What’s interesting is how the proteins in bivalve shells are diverse with known and yet to be discovered functions. Researchers thought the proteins were used solely to create the shell structure and yet the shell might also provide biochemical protection against pathogens in their habitat – creating a stronger immunity against the outside environment.”

“Our oceans are changing; they are becoming warmer and more acidic so understanding how these commercially important shellfish can deal with future change is essential. I’m really excited to see the publication of this special issue dedicated to the work of young researchers in our network. These preliminary results show great promise as building blocks for future research on shells and shell production. This is an area of increasing importance as it impacts on sustainability and socioeconomic issues.”

Cells to shells: the genomics of mollusc exoskeletons is published as a special issue of Marine Genomics in June 2016. See here: http://www.sciencedirect.com/science/journal/18747787

Michalek et al. : a review on the current knowledge with regard to how the invasive blue mussel (Mytilus trossullus) is impacting the shell thickness of, and consequently our abilities to culture, our native blue mussels (Mytilus edulis and Mytilus galloprovinicialis (the ones we normally eat)).

Yarra et al. and Vendrami et al.: two papers which describe the generation of thousands of new gene sequences in the four species. These papers investigate the structure of genes potentially involved in making the shell and variants of these genes which could be used as biomarkers to identify changing shell production in our increasingly acidic oceans.

Cardoso et al.: use mollusc data to shed light on the evolution of calcium regulation in multicellular animals, such as ourselves.

Bjärnmark et al. and Sleight et al.: both demonstrate that the tissue which produces the shell is highly complex and variable in function along the length of the shell, in spite of looking entirely uniform.

Hüning et al.: use a damage-repair technique (drilling holes into the shell and waiting for the animal to repair the damage) to uncover new shell genes involved in shell production.

Arivalgan et al.: have identified that proteins in the shell do not just play a structural role but may also play a role in helping defend the animal against infection, which has not been noted before.

Sillanpää et al.: demonstrate a new technique for identifying how calcium is acquired from the surrounding sea water to repair shell damage in the Pacific oyster.

Morris et al.: a review which highlights the wider impact that fundamental research can have on the exploration of beneficial bio-inspired applications for societal gain. 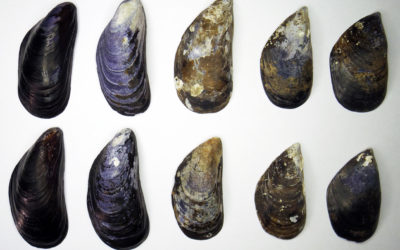