The 5,000 tonne ice patrol ship has just completed an intensive period of sea trials and training prior to deploying to the Antarctic Peninsula. The ship is on lease from Rieber Shipping which also leases RRS Ernest Shackleton to British Antarctic Survey (BAS).

HMS Protector will support BAS by deploying scientific field parties to remote sites around the Antarctic Peninsula and the re-supply of stations as well as obtaining hydrographic charts and imagery for the UK Hydrographic Office which provides 80% of the world’s nautical charts.

HMS Protector is being leased as an interim replacement for HMS Endurance which suffered flood damage when she was operating in the South Atlantic in 2008. Protector was commissioned into the Royal Navy in June on the 50th anniversary of the Antarctic Treaty and the centenary year of Scott’s expedition to the South Pole.

HMS Protector will deploy two science parties into the field. The first team, a collaboration between BAS and University of Exeter, will collect peat cores from the ground to shed new light on how ice shelves in the region responded to past climate change. The second, a collaborative project between University of Leicester and University of Aberystwyth will look for evidence of past glaciation. Both are funded by the NERC Antarctic Funding Initiative.

” We are now operationally ready to deploy to the South Atlantic. My ship’s company have worked tirelessly in recent months to re-generate the Royal Navy’s ice patrol ship capability. Working doggedly as a team we have achieved all that has been asked of us and to a very demanding timeline. I could not be more proud of the men and women under my command. We are now ready in all aspects to face the rigours of eight months in the extremely hostile environment of Antarctica”. 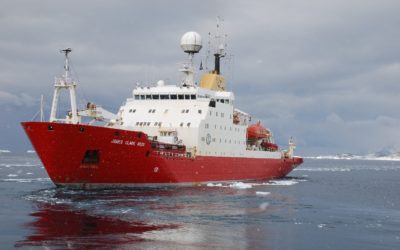