Scientists have found that studying high-resolution images of whales from space is a feasible way to estimate their populations. A team, led by British Antarctic Survey (BAS), compared satellite images to data collected from traditional ship-based surveys.  Reported this week in the journal Scientific Reports, this study is a big step towards developing a cost-effective method to study whales in remote and inaccessible places, that will help scientists to monitor population changes and understand their behaviour.

The results show that satellite-estimated whale densities were about a third of the densities estimated by ship. This is positive news, because it means that although satellites have poorer detection rates than ships, they still detect enough whales to make the method useful, for example for monitoring changes in whale abundance, particularly in remote regions where more expensive, traditional surveys are difficult.

The study took place in the Antarctic Peninsula, the primary summer feeding ground for many baleen whale species. Satellite images of the Gerlache Strait region spanning ~1000km2 were collected over two days, and compared to the Brazilian Antarctic Programme’s annual ship-based whale survey, taking place at a similar time.

“While this is a new method and we have a lot of work still to do, we hope this will pave the way for further developments that will provide a low budget means of collecting data on whales in the future. It will supplement existing efforts in remote regions, and provide information to safeguard whale populations and their remote feeding grounds”.

“This new technology could be a game-changer in helping us to study whales remotely. Our study shows that satellite surveys can be a feasible method for monitoring changes in whale abundance. This approach may be especially useful in remote areas that are hard to access with ships and planes, and where densities of whales may be high, such as the Southern Ocean.”

New methods offer exciting opportunities, but also need robust testing before they become operational. One issue is the ability to account for whales that are underwater. In this study researchers were able to utilise suction-cup tracking data collected by a US National Science Foundation whale tagging program that provides detailed information on dive duration and behaviour of humpback whales in the waters around the Antarctic Peninsula. This accounts for those whales that were likely to be missed as a result of being underwater, beyond the depth where satellite detection is possible. Further work is now underway using machine learning tools to assist with identifying whales on satellite imagery.

The evolution of satellites as a means of studying animals remotely is an exciting, and rapidly developing avenue of research, which was made possible through funding provided by WWF UK and NERC. The visual survey conducted by Dr. Luciano Dalla Rosa’s team was financed by the National Council for Scientific and Technological Development (CNPq).  Tagging work carried out by Dr Ari Friedlaender’s team was supported by the National Science Foundation. Satellite imagery was provided by DigitalGlobe, which is a Maxar technologies company. The Australian Antarctic Division also contributed to the study with statistical advice on the analysis of satellite image data, to derive whale abundance and density estimates. 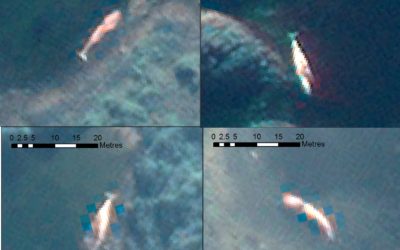 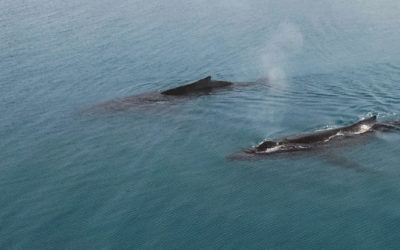