The most comprehensive picture of the rapidly thinning glaciers along the coastline of both the Antarctic and Greenland ice sheets has been created using satellite lasers. The findings are an important step forward in the quest to make more accurate predictions for future sea level rise.

Reporting this week in the journal Nature researchers from British Antarctic Survey and the University of Bristol describe how analysis of millions of NASA satellite measurements* from both of these vast ice sheets shows that the most profound ice loss is a result of glaciers speeding up where they flow into the sea.

The authors conclude that this ‘dynamic thinning’ of glaciers now reaches all latitudes in Greenland, has intensified on key Antarctic coastlines, is penetrating far into the ice sheets’ interior and is spreading as ice shelves thin by ocean-driven melt. Ice shelf collapse has triggered particularly strong thinning that has endured for decades.

“We were surprised to see such a strong pattern of thinning glaciers across such large areas of coastline — it’s widespread and in some cases thinning extends hundreds of kilometres inland. We think that warm ocean currents reaching the coast and melting the glacier front is the most likely cause of faster glacier flow. This kind of ice loss is so poorly understood that it remains the most unpredictable part of future sea level rise.”

The scientists compared the rates of change in elevation of both fast-flowing and slow-flowing ice. In Greenland for example they studied 111 fast-moving glaciers and found 81 thinning at rates twice that of slow-flowing ice at the same altitude. They found that ice loss from many glaciers in both Antarctica and Greenland is greater than the rate of snowfall further inland.

In Antarctica some of the fastest thinning glaciers are in West Antarctica (Amundsen Sea Embayment) where Pine Island Glacier and neighbouring Smith and Thwaites Glacier are thinning by up to 9 metres per year.

Stunning broadcast-quality footage and stills of Antarctica, as well as location maps are available from the BAS Press Office as above.

The team used data from NASA’s high-resolution ICESat (Ice, Cloud and Land Elevation Satellite). Launched in January 2003, ICESat was sent into a polar orbit to examine changes in the world’s ice and land masses — particularly ice mass balance — as well cloud and aerosol height. The satellite’s lasers have measured the surface elevation of the Earth’s ice sheets with unprecedented accuracy. The satellite’s repeated passes over both poles create a wide net of coverage, and contribute to a long-term time series of topographic changes.

For the first time scientists can see the elevation change over the whole of the Antarctic Peninsula, and that glaciers in this area have the highest rates of thinning recorded in Antarctica or Greenland.

A glacier — is a ‘river of ice’ that is fed by the accumulation of snow. Glaciers drain ice from the mountains to lower levels, where the ice either melts, breaks away into the sea as icebergs, or feeds into an ice shelf.

Ice sheet — is the huge mass of ice, up to 4km thick that covers bedrock in Antarctica or Greenland. It flows from the centre of the continent towards the coast where it feeds ice shelves.

Ice shelf — is the floating extension of the grounded ice sheet. It is composed of freshwater ice that originally fell as snow, either in situ or inland and brought to the ice shelf by glaciers. As they are already floating, any disintegration will have no impact on sea level. Sea level will rise only if the ice held back by the ice shelf flows more quickly onto the sea.The Cambridge-based

British Antarctic Survey (BAS) is a world leader in research into global environmental issues. With an annual budget of around £45 million, five Antarctic Research Stations, two Royal Research Ships and five aircraft, BAS undertakes an interdisciplinary research programme and plays an active and influential role in Antarctic affairs. BAS has joint research projects with over 40 UK universities and has more than 120 national and international collaborations. It is a component of the Natural Environment Research Council. 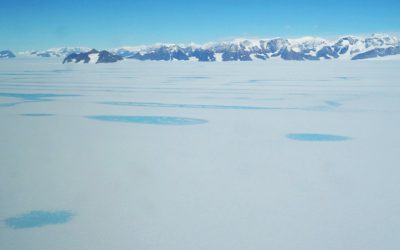