Nearly 60 scientists and support staff are on their way to Thwaites Glacier in West Antarctica. It’s part of an ambitious international effort to understand the glacier and surrounding ocean system to determine its future contributions to global sea-level rise. This season represents the fourth of five planned field seasons.

The International Thwaites Glacier Collaboration (ITGC) ambition started in 2018 and, after two successful field seasons, was then slowed by the effects of the pandemic. This led to a cancellation of major land-based field work in 2020-2021, although some instrument data were recovered, and a greatly reduced land-based field season last year. Despite these limitations, progress on understanding the glacier and surrounding system has continued apace.

Thwaites Glacier, covering 192,000 square kilometers (74,000 square miles)—an area the size of Florida or Great Britain—is particularly susceptible to climate and ocean changes. Over the past 30 years, the amount of ice flowing out of the region has nearly doubled. Computer models show that, over the next several decades, the glacier may lose ice even more rapidly. Already, ice draining from Thwaites into the Amundsen Sea accounts for about four percent of global sea-level rise. A collapse of the glacier would lead to a significant increase in sea levels of around 65cm (25 inches) over the coming centuries.

“This work is important. Data collected from Thwaites Glacier will underpin future sea-level rise predictions, providing our governments with the right information for policy and business actions that will help protect coastal cities, ecosystems and vulnerable communities.”

Thwaites Glacier is extremely remote; the study sites on the glacier are more than 1,600 kilometers (around 1000 miles) away from both the British Antarctic Survey (BAS) Rothera Research Station and the US Antarctic Program’s (USAP) McMurdo Station. Getting scientists and support staff to the field sites involves transferring people and equipment through multiple camps as staging bases using caravans pulled by specialised tractors and several different types of aircraft fitted with skis for landing on the snow.

Getting to Thwaites Glacier

The ITGC research teams have started arriving in Antarctica and are ready to move to their remote camps on the glacier. Four of ITGC’s eight research projects will be deployed this season focusing on different aspects of the glacier and its environment. They are: Geological History Constraints on the Magnitude of Grounding-Line Retreat in the Thwaites Glacier System (GHC), Thwaites-Amundsen Regional Survey and Network Integrating Atmosphere-Ice-Ocean Processes (TARSAN), Thwaites Interdisciplinary Margin Evolution—The Role of Shear Margin Dynamics in the Future Evolution of Thwaites Drainage Basin (TIME), and Geophysical Habitat of Subglacial Thwaites (GHOST).

Most of the teams are moving through the US McMurdo Station, with a smaller number travelling via BAS Rothera Research Station. From there, most will move to an existing camp called West Antarctic Ice Sheet Divide (WAIS Divide), the main field hub for access to the remote field sites across Thwaites Glacier. As of early December, this site was able to be accessed by US field support teams to start preparing the way for our teams. The TIME, TARSAN, and GHOST Teams will be staged at WAIS Divide before heading further afield. But first, the team of eight support staff on site will need to dig out and start equipment, groom the ski-way, move structures into place, get generators and fuel systems going, and complete other tasks to support 60 scientists passing through the camp and onward to the study sites.  In parallel, BAS tractors are traversing toward the camp in preparation to support the science.

Working on the ice this season

The TARSAN team first deployed multi-sensor stations called AMIGOS (Automated Met-Ice-Geophysics Observing System) onto the ice in 2019/20 to study the ocean circulation underneath the floating ice shelf and the weather patterns to investigate the environmental factors that influence the structural stability ice shelf. This season the eight-strong team will repeat radar survey lines to determine how much melting has occurred at the ice base since the previous measurements, recover AMIGOS components, make observations to collect precision surface topographic data and reset monitoring equipment.

This is the first field season for the GHOST team, which had planned to begin research in 2020. GHOST will undertake mapping of the ice and bedrock structure in the central and upper reaches of Thwaites Glacier. Twenty-four scientists and support staff will begin at the downstream end of the glacier and work steadily back upstream acquiring a number of different data sets on route, including seismic, radar echo sounding, and other geophysical measurements. One part of the team will use the BAS tractor train infrastructure, Pisten Bully vehicles, and containerised accommodation. The project uses a combination of observation-based studies and modelling to examine the bed beneath Thwaites by investigating the sediment, hydrology, and bedrock, and to assess the impact of these on the glacier’s dynamics. The team will be working on the ice until the end of January.

This season the TIME team of 12 scientists and support staff will head to the Eastern side of the glacier, the shear margin site, to carry out 2D and 3D seismic reflection surveys and radar measurements. The seismic technique uses sound waves at the surface to image the structure of the ice, much like an ultrasound. The experiments involve operating from a stationary remote camp and travelling with a fleet of ten snowmobiles to install small seismometers in the snow and to tow sled-based radar instruments across the shear margin. Observations made will be fed into computer models to predict future change and contribution to sea-level rise.

A GHC project team will be deployed to the Hudson Mountains, where they’ll collect rocks and use radar to collect data on past ice surface elevation changes. The team in the Hudson Mountains will drill rock cores from both above and below the edge of the present ice sheet to determine its past extent.

“We’ve had some serious setbacks from the pandemic, including this season, however, I’m delighted that we now have ITGC teams tee’d up for the deep field. It’s an ambitious field plan that has required constant adjustment, but we are underway again.”

“This is a critical field season for the projects looking at the interior of the glacier, the areas where the longer-term changes will play out. We’re also visiting the coastal area, probably for the last time before it breaks away.”

ITGC is a five-year, $50 million joint US and UK mission to learn more about Thwaites Glacier, its past, and what the future may hold. Significant contributions to the research are also coming from Sweden, Germany, and South Korea. The ultimate goal of the project is to predict how much Thwaites will contribute to global sea-level rise, and how soon a transition to more rapid ice retreat might occur. ITGC is funded by the US National Science Foundation (NSF) and UK Natural Environment Research Council (NERC). 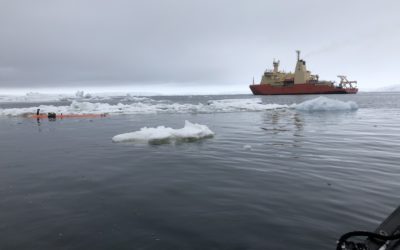