The often large ocean tides around Antarctica can greatly affect the flow of ice streams even long distances upstream of their grounding lines. Observing and modelling this interaction serves as a natural experiment that can provide constraints on the mechanical conditions at the bed of active ice streams that are difficult if not impossible to obtain in any other manner.

The main tidal stresses acting on an ice stream are: flexural stresses, generated by the bending of ice in the grounding zone; damming stresses, due to the change in ocean back pressure as the local sea level changes; and hydrological forcing, due to water pressure variations at the ice stream bed. Many previous models have only considered the impact of damming stresses on ice-stream flow. Our model is a 3D full-Stokes finite element model that treats ice as a viscoelastic model and is capable of including all of these forces without any simplifying assumptions.

We find that the damming stresses are far less important than flexural stresses in terms of their impact on ice-stream flow. The strength, character and length scale of the ice stream flow modulation, when only including tidal damming stresses, are very different. The relative importance of hydrological forcing is much more ice stream dependant; in the case of the Rutford Ice Stream this is the biggest driver of tidally induced changes to the ice-stream flow. We conclude that it is a mistake to only include damming stresses in models that investigate these tidal processes and we question the relevance of model studies that do so.

The Paper
Tidal controls on the flow of ice streams 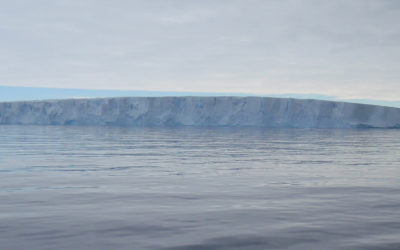