Drones, or un-crewed aerial vehicles, are helping scientists to survey remote colonies of seabirds more rapidly and efficiently than ever before. The results, which show population change in three seabird species, are published this month (March 2021) in the journal Polar Biology.

Scientists at British Antarctic Survey have been monitoring chinstrap penguins, gentoo penguins and shag colonies on sub-Antarctic Signy Island, in the South Orkneys, since 1978. Population counts have been carried out on the ground. This study shows close comparability between ground counts and drone surveys for all three birds.

“It’s impresive that the drones are capable of obtaining sufficiently high-resolution images to allow accurate identification of the birds, without providing any disturbances to the colonies.

“Our results confirm an ongoing population decline of 70% in chinstrap penguin breeding pairs over 40 years from 1978 and an increase of 150% in gentoo penguin pairs over the same period. The trends we recorded are consistent with studies from different sites across the West Antarctic Peninsula and the Scotia Sea which show evidence of similar population trends for the two penguin species”.

Cameras mounted on the drones were used to capture high resolution images of penguin and shag colonies, allowing the research team to accurately identify nesting birds.  Crucially, the images were detailed enough to allow breeding birds to be distinguished from non-breeders, and also allowed accurate identification of individual species, despite them having a very similar appearance and nesting adjacent to each other.

“The use of drone technology provides a fast, cost-efficient and less intrusive method of carrying out highly accurate seabird surveys, including in hard-to-access, remote locations with difficult terrain.  The importance of this study is that it allowed us to assess the accuracy of using drones by comparing counts of the same populations using two simultaneous survey methods.”

The study highlights the importance of carrying out comprehensive, long-term monitoring of population trends to allow scientists to understand the large-scale processes that drive such changes. Changes in penguin population size can indicate the state of the Southern Ocean ecosystem and this work feeds directly into the Commission for the Conservation of Antarctic Marine Living Resources (CCAMLR), which monitors ecosystems and manage fisheries in the Southern Ocean. 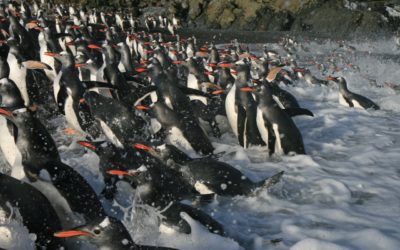