The British Antarctic Survey is proud to support Digital Explorer’s second visit to the UK Arctic Research Station this month to kick off its annual virtual adventure known as ‘Arctic Live!’ (4 – 15 May 2015).

Digital Explorer and the Catlin Oceans Education team are returning to the research village of Ny-Ålesund for an interactive education event which will offer students the opportunity to speak live to a member of an Arctic expedition on Svalbard, the world’s northernmost settlement. Students have the chance to discover more about life and science in the frozen north, and the importance of this unique ecosystem from the comfort of their classroom.

Dr Markus Frey from the British Antarctic Survey will also deliver an interactive Skype video lesson to students about living and working on the ice. As an Ice & Atmospheric Chemistry Scientist his research on air-snow chemistry and related ice core studies has taken him to Antarctica 7 times, and to the Arctic 4 times. He has recently returned from six weeks aboard Norwegian research vessel, the “RV Lance”, that was frozen into the sea ice for the Arctic winter. This pioneering project studying the entire life cycle of Arctic sea ice meant researchers had to endure challenging Arctic winter conditions with complete darkness, temperatures frequently dropping to below −30°C and polar bears. Markus carried out experiments on the sea ice and in the ship’s Crow’s Nest to understand better how salty blowing snow during winter storms may release sea salt particles to the atmosphere. Small sea salt particles floating in air are important for climate because they contribute to cloud formation and after polar sunrise to chemical reactions in air affecting ozone concentrations near the surface.

Take your class on a digital adventure by signing up to a live Skype video lesson or daily photo updates from the expedition team:

The UK Arctic Research Station is operated and managed by the British Antarctic Survey, which also operates its Twin Otter aircraft and research ships in the area. 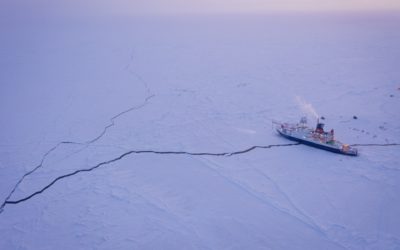