Deep valleys buried under the seafloor of the North Sea record how the ancient ice sheets that used to cover the UK and Europe expelled water to stop themselves from collapsing.

A new study published this week (Wednesday 5 October) has surprised the research team, who discovered that the valleys took just hundreds of years to form as they transported vast amounts of meltwater away from under the ice and out into the sea. This new understanding of when the vast ice sheets melted 20,000 years ago has implications for how glaciers may respond to climate warming today. The results are published in the journal Quaternary Science Reviews.

Tunnel valleys are enormous channels, sometimes up to 150km long, 6km wide and 500m deep (each several times larger than Loch Ness), that drain water from beneath melting ice sheets. There are thousands buried beneath the seafloor of the North Sea that record the melting of ice sheets that have covered the UK and Western Europe over the last two million years.

“This is an exciting discovery. We know that these spectacular valleys are carved out during the death throes of ice sheets. By using a combination of state-of-the-art subsurface imaging techniques and a computer model, we have learnt that tunnel valleys can be eroded rapidly beneath ice sheets experiencing extreme warmth.”

The team analysed ‘jaw-droppingly detailed’ seismic images that provide a 3D scan of the Earth’s buried layers. Informed by delicate clues discovered within the valleys, the authors performed a series of computer modelling experiments to simulate valley development, and test how quickly they formed as the last ice sheet to cover the UK melted away at the end of the most recent ice age about 20,000 years ago.

The research suggests that this process is quick by geological timescales, with the melting ice forming giant tunnel valleys within hundreds of years, expelling water that could otherwise accelerate rates of ice loss.

Traditionally, the drainage of water from beneath ice sheets is thought to stabilise ice flow, a process that could potentially buffer modern ice sheets from collapse in a warming climate. But while inspecting the detailed seismic scans, the authors began to find tell-tale signatures of both stagnant and rapid ice movement within the valleys, complicating the picture of how these rapidly forming channels might affect future ice sheet behaviour.

What is certain, is that the surprisingly fast rate at which these tunnels form means that scientists need to start considering their effects in models of how today’s ice sheets will evolve in the coming decades to centuries.

There are no modern analogues for this rapid process, but these ancient valleys, now buried hundreds of metres beneath the muds of the North Sea seafloor, record a mechanism for how ice sheets respond to extreme warmth that is missing from present-day ice sheet models. Such models do not currently resolve fine-scale water drainage processes, despite them appearing to be an important control on future ice loss rates and ultimately sea level rise. 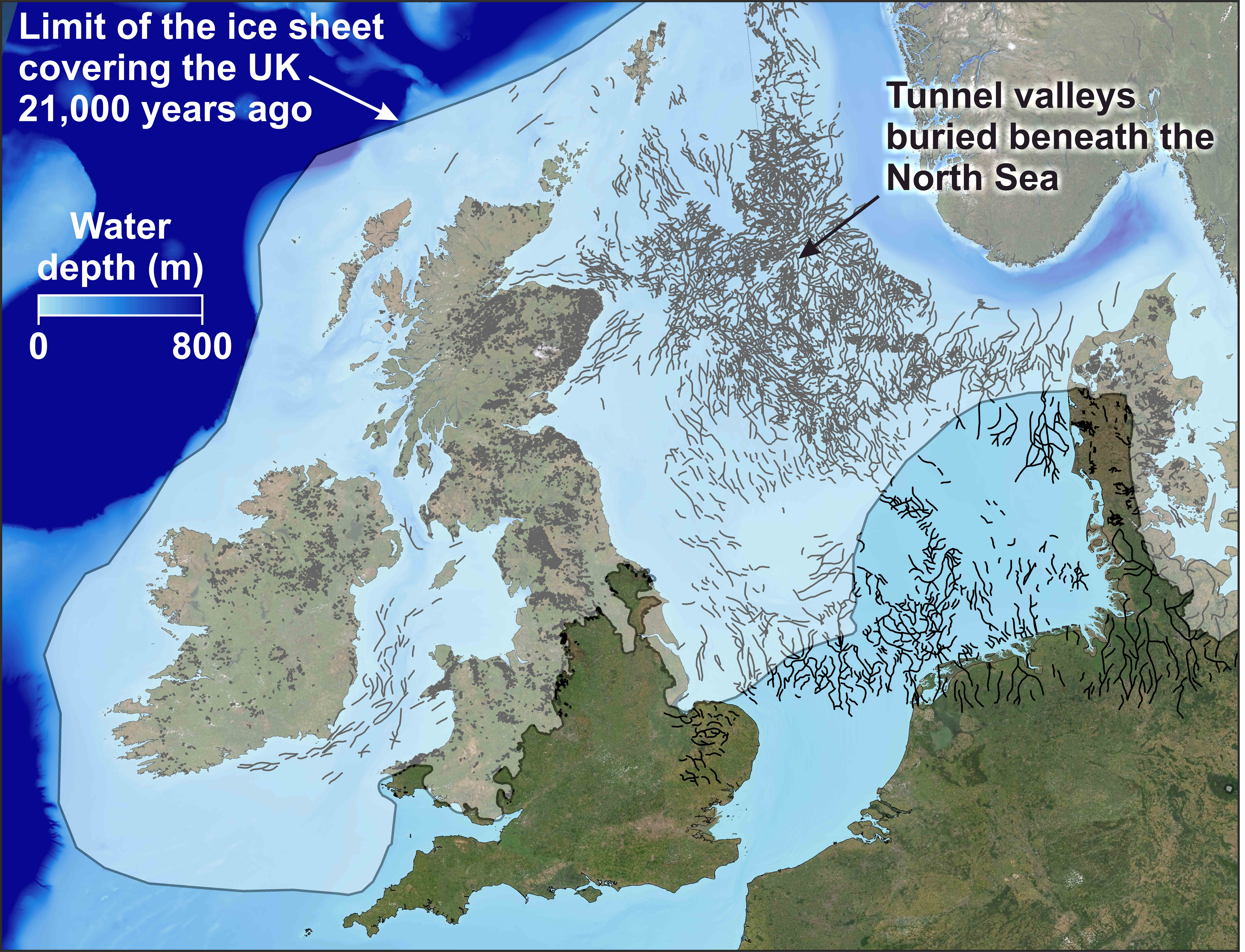 “The pace at which these giant channels can form means that they are an important, yet currently ignored, mechanism that may potentially help to stabilise ice sheets in a warming world. As climate change continues to drive the retreat of the modern-day Greenland and Antarctic ice sheets at ever increasing rates, our results call for renewed investigation of how tunnel valleys may help to stabilise contemporary ice losses, and therefore sea level rise, if they switch on beneath the Earth’s ice sheets in the future.”

Dr Kelly Hogan, co-author and a geophysicist at BAS, says:

“We have been observing these huge meltwater channels from areas covered by ice sheets in the past for more than a century but we did not really understand how they formed. Our results show, for the first time, that the most important mechanism is probably summer melting at the ice surface that makes its way to the bed through cracks or chimneys-like conduits and then flows under the pressure of the ice sheet to cut the channels. Surface melting is already hugely important for the Greenland Ice Sheet today, and this process of water transport through the system will only increase as our climate warms. The crucial question now is will this “extra” meltwater flow in channels cause our ice sheets to flow more quickly, or more slowly, into the sea.”

The work highlights a currently overlooked process that can rapidly switch on beneath melting ice sheets. Whether these channels will act to stabilise or destabilise the Earth’s contemporary ice sheets in a warming world remains an important and open question.

This work was developed from the study reported in the journal Geology in September 2021. This study provided a taste of the stunning detail achievable using the new 3D seismic reflection data, and revealed never-seen-before ice age landforms such as eskers, kettle holes, and crevasse squeeze ridges buried inside the North Sea tunnel valleys. These delicate landforms demonstrated for the first time that tunnel valleys alter how ice sheets flow. However, pressing questions remained over how the tunnels were cut, how quickly they formed, and how urgently scientists need to consider them when trying to predict how the Earth’s modern ice sheets will evolve in the future.

This new paper answers these questions by hunting for clues about how tunnel valleys are eroded in the 3D seismic reflection data, and using state-of-the-art computer simulations of the last ice sheet to cover the UK to calculate how quickly the tunnels form beneath a rapidly melting ice sheet. The results have important implications for how the modern Greenland and Antarctic ice sheets will evolve in the future. The authors highlight the need to consider important small-scale processes that cannot be resolved in the current generation of ice sheet models — in essence a mechanism that is missing from models of how ice sheets will melt in the future and contribute to sea level rise.

The novel data used in this study were recycled from the oil and gas industry. The data were   given a new lease of life by examining ancient ice age landscapes that offer a window into a future warmer world that we are heading towards due to climate change. These new data were combined with reconstructions from a state-of-the-art computer model of the ice sheet which used to cover the UK (the BRITICE-CHRONO project) led by researchers at the University of Sheffield (https://onlinelibrary.wiley.com/doi/10.1111/bor.12594).

The seismic data were originally collected by Gardline Limited, a UK based site survey company that developed the first 3D high resolution seismic system to operate successfully in the North Sea. The data were initially used for hazard assessments at drill sites but it was clear from the outset that the seismic data had far more to offer, particularly in the academic world.