As you make the last preparations for the festive period, spare a thought for those who will be working away in Antarctica for British Antarctic Survey. Over 250 staff, scientists and support staff, will spend Christmas Day either on one of the BAS research ships, at one of the five research stations or in the deep field living on the ice.

Halley Research Station is the first to celebrate Christmas, with a traditional feast planned for Saturday 20th December. Christmas at Halley is traditionally a very busy time of the year being the middle of the short season there. According to Station Commander Agnieszka Fryckowska, “we’ll be working 24 hours a day (doing 12 hour shifts) once the RRS Ernest Shackleton arrives on 23 December to re-supply the station with new personnel, fuel and supplies. This usually take between 1-2 weeks” The team that over-wintered at Halley since the ship left in April will be delighted to see new faces and indulge in fresh stocks of fruit and vegetables, having only had dried or tinned for over six months.

The RRS James Clark Ross will be in the Drake Passage on her way to Rothera Station, where she will re-supply them with fuel, supplies and prepare for a science cruise starting on 27 December.

At Rothera, BAS’s largest station, the Christmas decorations are up and plans are under way for a celebration with all the trimmings. Station Leader Mike Brian says, “although Christmas eve and Christmas day are work days, we’ll still celebrate in the evenings. On Christmas eve we’re planning a themed pub quiz compete with mince pies, mulled wine and carol singing. As for Christmas Day itself, there’s a good chance we’ll be flying. We have an ambitious field science and flying programme and good weather often gives us opportunities that we can’t afford to miss – even if it is Christmas. If we fly, a large proportion of the station will be working. That said, the chefs will pull out all the stops to make the day special and memorable.”

The menu for Christmas day is traditional with all the trimmings. Mike explains why he’s particularly looking forward to the ‘pigs in skins’ the sausages wrapped in bacon. He says, “We’ve been rationed to one sausage per person per week for about two months now to make sure we have enough for the big day.”

Out in the deep field, nine parties will spend Christmas on the ice. Small teams (from 2 to 12 people per party) living under canvas use the 24 hour daylight to conduct experiments and collect data. On Christmas Eve and Christmas Day, a crew from Rothera will call up the field parties over the long range radios to exchange greetings and stories, and maybe even sing a carol or two.

At the sub-antarctic stations of Bird Island, Signy and King Edward Point, work will be the primary job at hand. At Signy, although the scientists will continue to monitor the wildlife, Station Leader Matt Jobson says, “I’ll be waking up extra early to cook a traditional Christmas roast for everyone.”

And at Bird Island Station, Christmas is a busy time for the scientists. The zoological field assistants have to check and log every nesting wandering albatross on the whole island and the seal team continue their twice-daily checks of all the mums, dads and pups at the seal study beach. However, Station Leader Adam Bradley says, “The day will start with a rare treat – a cooked breakfast cooked lovingly by me accompanied by a few carols played loudly enough to rouse everyone out of bed!” He continues, “And then at the end of the day we can all enjoy a Christmas dinner.”

At King Edward Point Station, how busy the station will be depends on how many fishing vessels and tour ships are berthed nearby. As well as a traditional Christmas meal, a real highlight for the team involves helping to decorate the 100-year old ‘Old Whaling Church’ at Grytviken and taking part in a special service complete with hymns and Christmas carols. 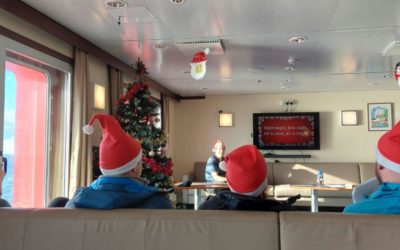