ANTARCTICA – 23 January 2023. A huge iceberg (1550 km²), almost the size of Greater London, has broken off the 150m thick Brunt Ice Shelf. It calved after cracks that have been developing naturally over the last few years extended across the entire ice shelf, causing the new iceberg to break free. This occurred on Sunday 22 January between 19.00 and 20.00 UTC during a spring tide.

The iceberg calved when the crack known as Chasm-1 fully extended through the ice shelf. The break off is the second major calving from this area in the last two years and has taken place a decade after scientists at British Antarctic Survey (BAS) first detected growth of vast cracks in the ice.

The Brunt Ice Shelf is the location of BAS Halley Research Station. BAS glaciologists, who have been monitoring the behaviour of the ice shelf, say that the area of the ice shelf where the research station is located currently remains unaffected by the recent calving events.

The glaciological structure of the Brunt Ice Shelf is complex, and the impact of calving events is unpredictable.  In 2016, BAS took the precaution of relocating Halley Research Station 23 km inland of Chasm-1 after it began to widen.

Since 2017, staff have been deployed to the station only during the Antarctic summer (between November to March). Currently 21 staff are on station working to maintain the power supplies and facilities that keep the scientific experiments operating remotely through the winter. Their work will continue until they are collected by aircraft around 6 February.

“Our glaciologists and operations teams have been anticipating this event. Measurements of the ice shelf are carried out multiple times a day using an automated network of high-precision GPS instruments that surround the station. These measure how the ice shelf is deforming and moving, and are compared to satellite images from ESA, NASA and the German satellite TerraSAR-X. All data are sent back to Cambridge for analysis, so we know what is happening even in the Antarctic winter – when there are no staff on the station, it is dark for 24 hours and the temperature falls below minus 50 degrees C (or -58F).”

“This calving event has been expected and is part of the natural behaviour of the Brunt Ice Shelf. It is not linked to climate change. Our science and operational teams continue to monitor the ice shelf in real-time to ensure it is safe, and to maintain the delivery of the science we undertake at Halley”.

Halley VI Research Station is an internationally important platform for atmospheric and space weather observation in a climate-sensitive zone. In 2013, the station attained the World Meteorological Organization (WMO) Global Atmosphere Watch (GAW) Global station status, becoming the 29th in the world and 3rd in Antarctica.

Halley VI Research Station sits on Antarctica’s up to 150-m thick Brunt Ice Shelf. This floating ice shelf flows at a rate of up to 2 km per year west towards the sea where, at irregular intervals, it calves off icebergs.

Halley VI Research Station has been unoccupied during the last six winters because of the complex and unpredictable glaciological situation.

The changes in the Brunt Ice Shelf are a natural process. There is no connection to the rapid calving events seen on Larsen C Ice Shelf which had extensive surface meltwater at the time of its collapse, and no evidence that climate change has played a significant role.

During the 2016-17 Antarctic Summer season (Nov-March), in anticipation of calving, the eight station modules were uncoupled and transported by tractor to a safer location upstream of  Chasm-1.

Over the summer 2018-19, BAS installed an autonomous power generation and management system – Halley Automation project – which provides a suite of scientific instruments with power even when there are no staff at the station. This system has proved effective in running through more than eight months of darkness, extreme cold, high winds and blowing snow and delivering important data back to UK.

In 2012, satellite monitoring revealed the first signs of change in a chasm (Chasm-1) that had lain dormant for at least 35 years.  This change had implications for the operation of Halley VI Research Station. In the 2015-16 field season, glaciologists used ice penetrating radar technologies to ‘ground truth’ satellite images and to calculate the most likely path and speed of Chasm 1. Chasm-1 has continued to grow since 2015 and by December 2022 extended across the entire ice shelf marking the beginning of the calving event.

About the A74 iceberg

In October 2016, a new crack known as Halloween Crack was detected some 17 km to the north of the research station across the route sometimes used to resupply Halley. By late 2020 another new crack had appeared further north, and an iceberg (now known as A74) calved in February 2021.  This iceberg has now drifted away from the Brunt Ice Shelf into the Weddell Sea.

About the new iceberg

The new iceberg formed along the line of Chasm-1 and is slightly larger than A74.  It is likely to follow the path of A74 in the Antarctic Coastal Current and BAS glaciologists will track its movement.  It will be given a name by the U.S. National Ice Center.

The Brunt Ice Shelf is probably the most closely monitored ice shelf on Earth.  A network of 16 GPS instruments measure the deformation of the ice and report this back on a hourly basis. European Space Agency satellite imagery (Sentinel 2), TerraSAR-X, NASA Worldview satellite images, US Landsat 8 images, ground penetrating radar, and on-site drone footage have been critical in providing the basis for early warning of changes to the Brunt Ice Shelf.  These data have provided science teams with a number of ways to measure the cracks with very high precision.  In addition, scientists have used computer models and bathymetric maps to predict how close the ice shelf was to calving. 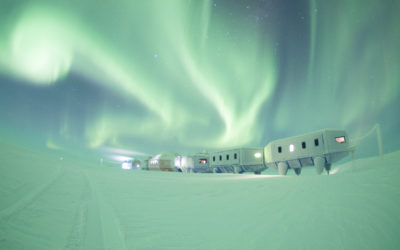