British Antarctic Survey (BAS) has decided, for safety reasons, that it will close its Halley VI Research Station during the 2018 Antarctic winter.  This will be the second time that the year-round operation of the station, which is located on a floating 150-m thick ice shelf, will be disrupted by a complex and unpredictable glaciological situation.

The latest expert assessment from BAS glaciologists confirms that the northern movement of a chasm in the Brunt Ice Shelf (which had previously been dormant for around 35 years) accelerated during the last 7 months (the Antarctic winter), and the second crack (known as Halloween crack) that appeared unexpectedly in October 2016, continues to extend eastwards.

Even though BAS has access to a highly sophisticated network of ice sensors and satellite imagery, it is impossible for glaciologists to predict future events on the ice shelf, including the timing and impact of any possible calving events.

“What we are witnessing is the power and unpredictability of Nature.  The safety of our staff is our priority in these circumstances.  Our Antarctic summer research operation will continue as planned, and we are confident of mounting a fast uplift of personnel should fracturing of the ice shelf occur.  However, because access to the station by ship or aircraft is extremely difficult during the winter months of 24-hour darkness, extremely low temperatures and the frozen sea, we will once again take the precaution of shutting down the station before the 2018 Antarctic winter (March – November) begins.”

The 14 members of staff who expected to spend winter at Halley will be redeployed, either at other BAS-operated Antarctic research stations or in its Cambridge headquarters.

Halley VI Research Station sits on Antarctica’s 150-m thick Brunt Ice Shelf. This floating ice shelf flows at a rate of 0.4 km per year west towards the sea where, at irregular intervals, it calves off as icebergs. Halley is crucial to studies into globally important issues such as the impact of extreme space weather events, climate change, and atmospheric phenomena. It was ozone measurements at Halley that led to the discovery of the Antarctic Ozone Hole in 1985 — they are now being used to evaluate its recovery.

Long-term monitoring of the natural changes that occur in the ice shelf has revealed changes, including recent growth of a chasm that was previously dormant for around 35 years.

Changes in the ice at Halley is a natural process and there is no connection to the calving events seen on Larsen C Ice Shelf.

During the 2016-17 Antarctic Summer season (Nov-March), the 8 station modules were uncoupled and transported by tractor further inland.

British Antarctic Survey (BAS), an institute of the Natural Environment Research Council (NERC), delivers and enables world-leading interdisciplinary research in the Polar Regions. Its skilled science and support staff based in Cambridge, Antarctica and the Arctic, work together to deliver research that uses the Polar Regions to advance our understanding of Earth as a sustainable planet. Through its extensive logistic capability and know-how BAS facilitates access for the British and international science community to the UK polar research operation. Numerous national and international collaborations, combined with an excellent infrastructure help sustain a world leading position for the UK in Antarctic affairs. For more information visit www.bas.ac.uk 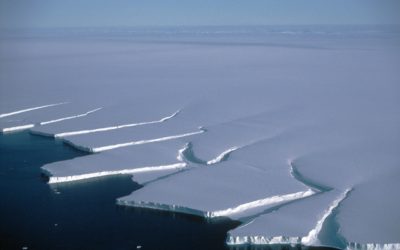