Antarctic krill, a shrimp-like crustacean that can grow to 6cm long, is a food source for fish, whales, seals, penguins, and other seabirds. Krill is harvested by a commercial fishery to produce a range of products including fishmeal for feeding farmed fish, and nutritional supplements for people. The fishery mainly operates around the South Orkneys and South Georgia and near the Antarctic Peninsula, areas where the British Antarctic Survey (BAS) has a strong research presence. For brevity, these areas of the Southern Ocean and the seas that connect them (technically CCAMLR subareas 48.1 to 48.4; https://gis.ccamlr.org/) will be referred to as the Southwest Atlantic sector in the remainder of this document.

Fishing for Antarctic krill is permitted under an international agreement between the 25 states (plus the EU) which make up the Commission for the Conservation of Antarctic Marine Living Resources (CCAMLR). This Commission is responsible for conservation and fisheries management in the Southern Ocean.

As markets for krill products grow, it is important to ensure that fishing is managed sustainably to meet the needs of krill predators as well as those of the fishing industry. Long-term ecosystem research by BAS underpins the management of the krill fishery and conservation of the Southern Ocean ecosystem.

How does BAS science contribute to krill fishery management?

BAS marine ecosystems research has a particular focus on Antarctic krill and the ecosystem it supports. BAS scientists monitor krill and its predators, including seals and penguins, at South Georgia and the South Orkneys. Research topics include the biology and population dynamics of krill, its relationship with predators, and how it responds to change. BAS scientists have also developed novel models and analyses to evaluate and refine management approaches for the krill fishery.

For more than 40 years, BAS has provided critical evidence to support UK leadership in the conservation of Antarctic marine ecosystems. BAS scientists are very active within CCAMLR, which uses the expertise of international scientists and the evidence they provide to formulate policies for managing fisheries, designating Marine Protected Areas (MPAs) and devising other conservation measures. BAS science also informs the decisions of the Government of South Georgia and the South Sandwich Islands (GSGSSI), a UK Overseas Territory, which manages part of the krill fishery in co-operation with CCAMLR.

What is a sustainable level of fishing?

As CCAMLR is responsible for both fisheries management and conservation, its management framework requires:

This is consistent with various definitions of sustainability, including the Marine Stewardship Council’s Principles and Criteria for Sustainable Fishing, and the Scientific Consensus Statement on Marine Ecosystem-Based Management.

Based on these criteria, CCAMLR has determined that annual catches of up to 5.6 million tonnes are sustainable across the Southwest Atlantic sector. To provide additional protection for krill predators, the catch limit has been set at a much lower level (620,000 tonnes, equivalent to approximately 1% of the estimated krill biomass in this area). Catches cannot increase beyond this limit until CCAMLR has designed and agreed a management system that spatially subdivides the krill catch to minimise any adverse impacts upon krill predators.

As a first step in this process, CCAMLR has defined local catch limits (93,000 to 279,000 tonnes) for four large “subareas” within the Southwest Atlantic sector. CCAMLR is in the process of designing a new management system for the krill fishery to achieve better spatial subdivision and make better use of information on krill stock status. This long-term project requires collaboration and agreement between scientists from many nations, commercial fishers, fishery managers and Non-Governmental Organisations. BAS scientists are playing a leading role in this endeavour with projects examining the ecosystem risk associated with different spatial patterns of catch, and how krill biomass changes over time.

What is the role of Marine Protected Areas?

Marine Protected Areas or MPAs aim to conserve biodiversity in defined areas where there is a need for enhanced protection. Some MPAs are strict no-take zones, which provide enhanced protection through prohibition of all fishing activities, while other MPAs restrict a different or more limited set of activities. In fact, many MPAs are composed of several different types of area with different protections in each. MPAs and the fishery management measures described above can complement each other to provide protection for both the krill stock and the wider ecosystem. BAS provides scientific evidence to both CCAMLR and GSGSSI to support the development and monitoring of MPAs. More information is available on the BAS website.

How is the krill fishery managed at South Georgia?

GSGSSI often imposes more stringent restrictions than CCAMLR. For example, in 2012, GSGSSI implemented a large MPA around South Georgia and the South Sandwich Islands covering the maritime zone north of 60° S, stretching to a distance of 200 nautical miles from the coast (see www.gov.gs). The MPA includes no-take zones extending 30km from the South Georgia coast and a pelagic closed area extending 50 km from each of the South Sandwich Islands. Krill fishing is only permitted in the winter months, when many predators disperse to other waters.

How do krill stocks change over time?

Information on the size of krill stocks and how they change over time is one of the key requirements for sustainable management of the fishery. Large-scale surveys, covering much of the Southwest Atlantic sector, indicate a very high biomass (around 100 times the current 620,000 tonnes catch limit). However, these large international efforts are too infrequent to show how stocks change from year to year or season to season. BAS has monitored changes in both krill stocks and its predators at smaller spatial scales for several decades. In addition, BAS has led the recovery of historical data from international sources, leading to peer-reviewed publications that have provided insights into changes over the last century. In particular, these studies point to a major decline in krill in the 1980s, although this is not universally accepted.

These sources of information further indicate that the abundance and biomass of krill and its availability to predators can vary dramatically between years. In some years, krill is scarce around South Georgia and this affects penguins and seals which struggle to feed their young.

What effect is climate change having on krill fisheries?

The Southern Ocean has shown signs of rapid climate-induced change, often exceeding the rates of change seen elsewhere on Earth. Climate change has the potential to alter marine ecosystems significantly. CCAMLR is concerned about the threat of climate change to fisheries and ecosystems (www.ccamlr.org/en/resolution-30/xxviii-2009), as is the GSGSSI. Over recent decades, fishing near the Antarctic Peninsula has started earlier in the year (i.e. in winter) and moved further south, which reflects the impacts of environmental changes (reduced ice cover) resulting from climate change. Managing fisheries into the future will require careful consideration of these effects. BAS is part of the international effort to monitor the krill stock and its predators for any signs of adverse impacts, and to examine how the ecosystem might respond to future change.

Although catches at South Georgia are usually low in years when krill is scarce, annual catches in the Southwest Atlantic sector have tripled since 2000. This trend of increasing catches has been driven mainly by demand from the fishing industry as it develops new markets for krill products such as nutritional supplements. 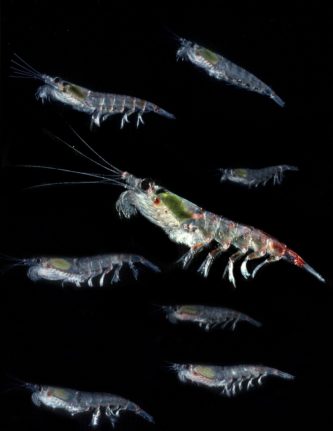 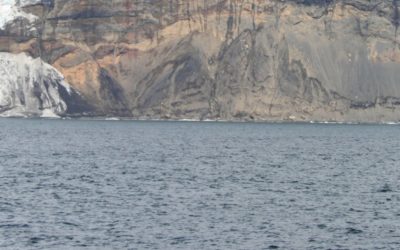 Spatial and Temporal Operation of the Scotia Sea Ecosystem

Food web structure and bioregions in the Scotia Sea: A seasonal synthesis