There is a lot that’s unique about Antarctica. It’s the coldest, windiest and least populated of the world’s continents. It’s the highest continent on Earth and the world’s largest desert. It is also the only continent without Coronavirus. A place often considered hostile and dangerous, Antarctica is now being described by some as one of the safest places on Earth.

The wintering BAS research stations are now preparing for winter in isolation. The BAS research ship RRS James Clark Ross  is on its way back to the UK, due for arrival in early June. Just 41 people will spend the winter in Antarctica – 28 at Rothera Research Station, nine at King Edward Point and four at Bird Island.

Winters in Antarctica are long and dark – in the depths of winter, the sun doesn’t rise at Rothera for many weeks at a time. So, the lucky few that have experienced an Antarctic winter know more than most what it’s like to live in relative isolation, spending many months away from friends and family.

Over the last couple of months, our teams in Antarctica have been talking about how it feels watching the Covid-19 pandemic unfold from a distance. Here they share their thoughts on how the isolation of being in Antarctica compares to living in lockdown.

Rob Taylor is a Polar Field Guide, who is spending his first winter at Rothera. He arrived in Antarctica in October 2019 and won’t be going home until April 2021.

“There’s no such thing as a typical day in Antarctica – not only is the environment unlike anything most of us have ever experienced before, but day-to-day life is also very different when you’re more than 10,000 miles from home. We don’t use money here, for example, and from now until the start of the next season, around October time, there will only be 28 of us here!

“We’ve all kept up with the news, as it crept from the back pages to dominate headlines. And we all have friends and families, older family members in particular, who we are concerned for. It’s like being on the moon and looking down; we can see what’s going on but it’s a long way away.

“All of us here committed to certain restrictions when we decided to come here – we wouldn’t see friends and family, we wouldn’t go on holiday or go outside the designated recreation area. To find ourselves in a situation where we have more freedom than we would had we remained at home is strange!

“They say that living in Antarctica changes you. I can’t help but wonder if the rest of the world might change more in this time than we will.”

Kelly Hogan is a Marine Geophysicist. She returned from Antarctica last month, having spent 10 weeks working on the US research ship R.V Nathaniel B Palmer in West Antarctica and then at Rothera, just as coronavirus began to spread.

“Being so far away from friends and family felt a little isolating, but it was easy to stay in touch. By telling my loved ones about my day and hearing about theirs, I still felt involved in their lives. We all brought home comforts away with us.

“My most cherished items were photos of my beautiful daughter, and cards and drawings she gave me before I left – and my favourite chocolate and coffee grounds! The most eccentric item I brought was a small, fluffy kiwi bird cuddly toy that belongs to my daughter – she pressed it into my hand before I left saying that because she normally sleeps with the kiwi, then if I had him with me it would be like we were together. Needless to say, I kept him on my bed every night!

“We were all watching what was going on at home – it feels strange to say but in Antarctica we were pretty safe and secure. It might be the safest place in the world! However, I missed my family immensely and couldn’t wait to see them. I called home almost every day , even just to say good night – we were lucky we could do that from Rothera.

“However, despite being far from our families and our homes, it wasn’t lonely! I was with people most of the day, from meals, to working, to watching a film in the evening.

“I know many of my friends are meeting virtually – it gives that same sense of sharing an experience. Some of my friends and family have asked whether the lockdown we’re experiencing is similar to how it feels working far from home. Making new routines for your new circumstances helps, to feel productive when you’ve finished a task. And keeping in touch with loved ones through video chats or sending photos. I would say I was in touch with loved ones back home even more than I would normally be – it’s interesting that people seem to have more time now – the situation is bringing us together rather than keeping us apart.”

Nadescha Zwerschke is a Marine Ecologist who has just returned home after spending 16 months at Rothera.

“Isolation in Antarctica is a bit different from what the rest of the world is experiencing now. Although we are cut off, there were still 23 of us living and working together during the winter, and 160 people during the summer.

“Antarctic winters are cold and dark – and that can feel lonely sometimes. But speaking to friends and family helps. If I was having a hard time I often put on a pair of skis and went up the hill in the morning – watching the sunrise always feels special, even if you’re alone.

“Our winter team tried to get creative and think of ways we could pass the time – we had a table tennis tournament to celebrate Wimbledon and organised a casino night with Monopoly money. I got very into baking (like everyone at home!) and experimented with recipes I never have time for, like making croissants from scratch! You finally have time to do what you always wanted to do.

“My top tip – never take the mood of your isolation buddies too seriously – they probably didn’t mean what you think they said!

“The virus has changed my plans – some of us had planned to go travelling in South America, and not being able to see my grandma, sister or brother is pretty hard to stomach after such a long time.”

Aurelia Reichardt is a marine biologist who has just spent the past six months managing a laboratory facility at Rothera. She is now travelling back to the UK on the RRS James Clark Ross.

“We may be geographically isolated but we have access to lots of facilities – in some ways we are less isolated than people back home! There is a gym and a climbing wall, and a film room, for example.

“Sometimes the isolation, the darkness and the distance from home can be a lot. Little issues – like crumbs around the toaster can become very frustrating! But spending the winter in Antarctica is a privilege. Seeing the sun rise over the horizon for the first time after winter, with everything engulfed in golden light, is something I will never forget in my entire life.” 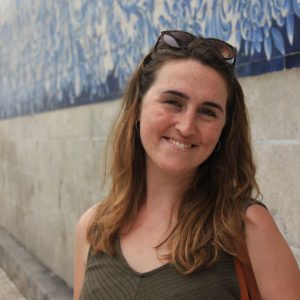