March has been a busy month for all of us at Halley station. Following the departure of the RRS Ernest Shackleton in February, March saw the continuation of winter trips, beginning to gear up ready for the onset of winter, and the first few birthdays of the season.

As explained in February’s diary, winter trips are primarily a chance to get off base for a few days. I was a late-comer to Halley myself having arrived at the beginning of February, and thus had spent most of time so far on base acquainting myself with the new routine of being the Met babe (Met Scientist). For my trip, from Mar 3rd – 7th our GA Al (Field Guide), Comms manager Kev and I spent 5 days ice climbing, exploring crevasses and wind scoops, and marvelling at the Antarctic paradise of the Brunt Ice Shelf Hinge Zone. It was quite surreal, to explore landscapes or climb ice features that have unlikely been seen by anyone before. Another highlight was visiting ‘Stony Berg’ – the imaginatively named ice feature with a layer of stones below its icy crust. Radiation from the sun that can penetrate the top few inches of ice has been absorbed by the rocks, warming them, and in turn melting the surrounding snow. This has left a gap of several inches between the rocks and the crust of the ice; creating opportunities such as this photo.

After 5 days in the Hinge Zone, it felt bizarre to come to think of Halley as ‘civilisation’; the land of running water, food that wasn’t dehydrated and heat sources other than a Tilly lamp. I should clarify here that camping BAS style is by no means a hardship. The tents are more robust than my old student house; and possibly even warmer when the Tilly lamp is on. The addition of copious amounts of chocolate, down feather slippers, and a tent cheese knife cements BAS camping as about as luxurious as tent life can get.

There were trips to N9 and the Creeks to raise drum lines, as well as fuel raises on base to counter the 2.5m of expected annual accumulation. With the summer staff returned to England, the summer accommodation block, the Drewry, was fully winterised along with most of the larger vehicles.

For the science team at Halley, the onset of winter signals the need to prepare instruments and experiments for extreme cold temperatures. Wires can become incredibly brittle in low temperatures, and thus need to be firmly secured to ensure the wind does not cause them to abrade on their catenary poles. The catenary poles themselves along with flag lines and things like the Halley Wind Farm also need to be raised.

The first day in March provided us with our coldest temperature to date of -42°C, and also the realisation of how much we have acclimatised. When I arrived in February, a warm day would be in the region of -5oC and a chilly day would be -15°C. Now here we are shedding layers in anything more than -20°C. Below -30°C is the threshold for the use of vehicles with rubber tracks such as skidoos, so those of us who use skidoos to access cabooses or off base sites now have to plan accordingly with the temperature.

This drop in temperature brought some incredible atmospheric displays as the clouds became glaciated. Diamond dust falling like glitter for days on end provided endless halos, sun dogs, perihelia, tangent and circumzenithal arcs and sun pillars. How many names can you match to the picture?

The 6th of March was a special day at Halley as it was the first birthday of the season. Our esteemed Comms manager Kevin Hallam enjoyed a night of bar games with intra-departmental competitions in darts, pool and table football.

The dog track came to Halley on the 15th of March to provide a night at the races in the form of recorded actual dog races. We donned our finest dog racing attire and clambered over fellow punters to place our bets of Halley pounds at Honest John the Book maker’s stall, with prizes going to the winner of each race and then an overall prize for the wealthiest punter at the end of the night.

Finally, it was the name day of Lord Eager, first of his name and Protector of Halley, on March 28th. The Wall from Game of Thrones was immortalised in icing in a fantastic if not enormous cake made by Doc James Townsend, complete with marzipan heads skewered on cocktail sticks decorating the battlements. 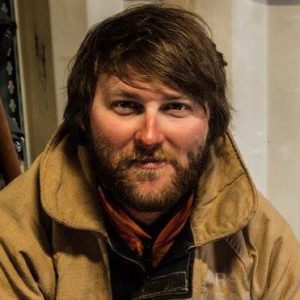