“Goodbyes” get harder each time so I avoid them by saying “See you later” as if I’m just going to the shop. The journey South is long and for me started by flying North: Zurich-London-Cambridge-London-Madrid-Santiago-Puerto Monte-Punta Arenas-Rothera Research station. I travel a lot with work but even for me this is a long one. It is a small world, but not always. When we landed in Punta Arenas and began taxiing to the gate I caught a glimpse of the British Antarctic Survey’s Dash-7 on the apron.

A sudden rush of excitement cut through my fatigue and disorientation briefly as I remembered some of the moments working with her in the Antarctic; the low level flying through mountains, landing on a pure ice runway, the jokes shared with the air unit. There is more of that to come but first a shower, some sleep and a visit to the bronze monument of Magellan in the town square. A visit to the monument is an important ritual. Sailors used to go there to touch the toe of the statue for good luck and to ensure a safe return after sailing the southern oceans. One of the pilots, a mechanic and myself make a specific visit after dinner to ‘go and touch the toe’, to ensure our safe return.

The next day we boarded the Dash and departed for Antarctica. The excitement and enthusiasm of the people going South for the first time was contagious. After a few hours we started to see ice bergs a drift in the black ocean twenty thousand feet below until eventually we saw the glaciers and mountains of the Antarctic peninsula. Earlier this year I was in the Arctic thinking how similar it was to the Antarctic but when I was there in the Dash looking down I realised how wrong I was. I realised how the Antarctic is on a scale like no other, how it inspires something inside you like no other place. Five hours into the journey I saw some mountains I recognised and pointed them out to the new-starters telling them the names and the names of the surrounding glaciers. They didn’t seem particularly interested until I pointed out the runway and the base looking minuscule below, then their faces lighted up as they realised how spectacular the place where they will be living actually is. I make a comment in passing about keeping some perspective. It’s easy to be consumed by life on base, believing sometimes it’s the center of everything (due to the lack of external input from any other civilisation) but it’s important to stop and take a look around once in a while.

When I stepped off the aircraft everything was hugely familiar and I wasn’t the only one that thought so. Murmurs of “it’s like I never left” were heard occasionally and I even take my usual seat at the dinner table and my usual cup from the rack. For some people it’s their final destination, for my team and I we still have another nine hundred miles to go to get to our start point.  First we have some time to prepare equipment, clothes and perhaps go for a recreational ski around the base to see what wildlife we can see. 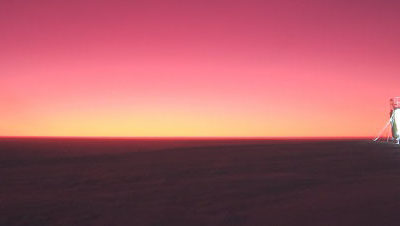