When I last wrote a web diary, back in April, it was at the end of the summer season and the first few intrepid weeks of winter. It’s hard to believe that I now write whilst we are over half way through winter and with the summer season just ahead once more. It seems that we are surviving well as a team of four here so far and as you will have heard last month from Robbie’s web diary, we have been managing to keep ourselves busy. Here is a little taste of what we’ve been up to this month which has included multiple leopard seals, wanderer chick ringing and…superheroes?!

The main task of this month was to get the bulk of the wanderer chick ringing started and completed. It’s an interesting technique to ring a wandering albatross chick as they are now very big, but it can be done quickly and efficiently with practice. Over 600 chicks have been ringed in total. Al and I also made short video contributions for a film being presented at the World Seabird Conference, taking place this year in Cape Town. We were asked to be ‘Global Ocean Sentinels’ and state who we were, where we were (try saying that quickly!), and what we did – all in 10 seconds! As the albatross assistant I sat beside a wanderer chick for my film and as the petrel and penguin assistant, Al sat beside a giant petrel for his clip. Apart from the wanderer ringing, and finishing our South Georgia pintail and snowy sheathbill fortnightly counts, everything else bird related has been to prepare for the upcoming breeding season and to make sure that all lab work and indoor tasks are completed where possible, as it will get very busy in upcoming weeks.

Siân has had a really busy month with many leopard seal sightings – there have been numerous haul outs and many sightings in the water, including seeing leopard seals making kills right by base. It is always incredibly special to watch such a predator in action. Of course I can’t help but feel sorry for the unfortunate penguin or fur seal who is being chased and eaten – but that is nature after all! This month also saw one of our first large elephant seals flop out in a rather ungainly manner onto the beach. I think he’s definitely been on the pies this winter! We are all really excited to see the big males come ashore in the upcoming months and to hear their distinctive bellows fill the air.

Robbie has now very nearly completed the installation of the new fire alarm system. We originally thought we might have to do night watches when the switching over of the systems occurred but Robbie cleverly worked out a way that meant each section could be done bit by bit, meaning no night watches for us, phew! As Robbie now only has two months left here until the ship comes in in November, he is now going through a list of work tasks he has set himself to complete, and is also trying to get the most out of the island on the good weather days that we do sometimes still get!

The main event of the month, base-life wise, was taking part in the 48 hour Antarctic Film Festival. If you have read entries from past years you will know that each August there is a competition across all Antarctic bases to film, edit and upload a 5 minute film in 48 hours. And so for one weekend-only, the four of us wintering on Bird Island got to fulfil our very own “being-a-superhero” based fantasies, and became ‘The Avengers’.

The story for our film entry was based around Loki, the baddy, coming to Bird Island for world domination. To achieve his goal he destroyed our communications tower, and in doing so our ability to access our long-term datasets and our ability to communicate with the outside world. The Avengers were sent in to save the day, but meanwhile we Bird Island humans decided that maybe we do get on without all the outside comms back home after all and that we can in fact talk to each other. It was a weekend full of laughs, typically terrible BI weather from freezing rain one minute to a snow-storm the next – making for interesting outdoor filming, and maybe one or two stressed moments along the way too to get it all edited and finished on time for the upload. Perhaps it was a self-fulfilling prophecy in the script that after the weekend we did indeed feel like we knew each other that much more having spent every waking moment with one another for 48 hours solidly – and turns out, we do still get on, just about!

It was a real team effort: Siân’s initial inspired idea and creative genius with comic drawings and in editing, Robbie’s fantastic addition of special effects, time-lapse photography and sound production, Al’s nifty camerawork even being able to get six people in the same shot, no mean feat when there’s only four of us, and my years of “character work” to guide the team into getting the most from their roles.

After the incredibly high standard last year with the fantastic Lord of the Rings parody Bird Island-style, led by Jerry Gillham, we really didn’t want to let the Bird Island side down. We were therefore beyond thrilled, and indeed shocked, when we received second place for Best Film, second place for best Love Scene (which has to be seen to be believed, let’s just say Robbie has hidden acting talents), second place for best use of the elements which had to be included in the film and our proudest accolade of all – we won the Best Acting award! Of all the many, many skills that I have acquired with working for BAS, never did I think I would be able to legitimately add to my CV, “Award winning film director” – but turns out, when you work for BAS, anything is possible! We were disappointed not to see our friends from the other British bases not recognised in the awards because we enjoyed all the films from Rothera, Halley and KEP too but hopefully they all had equally as much fun as we did in the making of it.

As well as the film festival contributing to a fun weekend we have had other fun-filled nights this month including: an incredible Thai food night put on by Siân that has to be some of the best food I’ve ever tasted, an Italian restaurant night inspired by one of my favourite restaurants back in my home town of Derry, called La Sosta, a crazy golf night around the base, and an interesting ‘Multiple Limbs night’ which Robbie put on (it’s best not to ask).

And so as far as my own work goes as of 1st September my daily fieldwork rounds begin for the return of the mollymawks to the island. With this in mind, I took the last two days of August off to go exploring around parts of the island I hadn’t been before – you could term this a “holiday” I suppose! I know that some people before they start daily fieldwork would probably rather spend those days resting up their limbs, but I find it’s good to keep as fit as possible whilst down here to prevent getting achy from daily walks. I was excited to see parts of the island I hadn’t been to yet. Hugging the coastline, I walked on the side of the island I won’t often get to go to in upcoming months because none of my study plots are there.

It was wonderful to see the seasonal changes occurring in reverse this time: now more fur seals are coming onto the beaches, more gentoo penguins have come ashore, south Georgia pipits are singing loudly for spring – reminding me of garden birds back home – and the mosses and lichens are revealing themselves again, emerging from the winter’s frost.  I can hardly believe that a new summer season approaches but I am very excited for the other albatross species to return to the island and can’t wait to get stuck into the study colony work again. It has without a doubt been an incredible experience sharing a winter with just three other people, and we have certainly been kept busy with both work and our social evenings. But with only two months to go until the new summer team comes in we are all very much looking forward to their arrival, and the return to the station of Jerry as our Station Leader.

But for now – it’s time to appreciate all the new sights and sounds of the returning wildlife on the island and to make the most of still having our own rooms over winter! 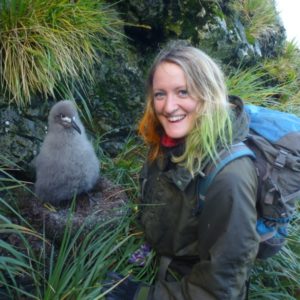