The FISS project is huge on a logistical scale. Drilling through an eight hundred meter ice shelf and providing support and equipment for several seismic, radar and instrument inputs and surveys requires a lot of equipment.  To move that equipment BAS and AWI have employed the use of four Pisten Bullies (the same machines used to groom ski slopes) to drag the equipment on sledges across different sections of the continent in order to get it to the desired location.

Using the PB’s saves huge amounts of fuel as the vehicles can tow amounts of equipment that would be impractical to input via aircraft. A lot of equipment is still sent via aircraft but only as far as Sky-Blu, an important operational hub used by BAS. Sky-Blu is an extremely windy place throughout the winter. The wind scours the snow until it eventually forms blue ice. The blue ice means that the BAS pilots can land the DASH-7 (which has a larger payload and is on wheels) there. Watching the DASH land on solid ice is impressive no matter how often I see it. Imagine driving your car at eighty miles per hour on pure ice and trying to stop within six hundred meters. Now imagine a four engine turbo prop aircraft descending from seventeen thousand feet doing the same thing. Now place a mountain at the end of the runway and you are somewhere close to the reality. This year two of the PB’s were at Sky-Blu ready to receive the cargo from the DASH and then ‘traverse’ to a point known as Filchner Turn on the Ronne Ice shelf where the other two PB’s will be waiting to collect it…Hopefully (Hopefully because it’s my job to get them there!).

This year I was on the first DASH flight to Sky-Blu with the cargo intended for the traverse (known as iBeam) heading towards Filchner Turn along with two colleagues from AWI. Mid-flight I asked the Chief Pilot what the temperature was at Sky-Blu as he receives regular weather reports from people on the ground there. The answer was -32 degrees Celsius. When we left Rothera it was approximately zero degrees and in three hours we were to step out into -32 and into 24 hour daylight. When I informed my colleagues of the temperature we all started adding layers and covering up every square centimetre of skin until we all looked like imitations of the Invisible Man. After we landed I carefully stepped out onto the ice and my eyelashes and nostrils immediately started to freeze. I said hello to my friends and colleagues who had arrived weeks earlier via Twin Otter aircraft. I couldn’t help but cough as the cold air scratched at my unaccustomed lungs. We unloaded the aircraft and started moving the cargo to the iBeam PB’s which were waiting so they could be loaded and made ready to start driving across the continent the following day.

The DASH departed and everybody that remained helped load the cargo into the early hours of the morning. When we finished at 3am the sun was low but still above the horizon and created a surreal purple and gold light which was spectacular. The temperature dropped even further and the wind picked up slightly so the snow started to drift. In that moment I remembered just how much I love the cold.

iBeam departed the next day while we remained at Sky-Blu awaiting a Twin Otter to pick us up and fly us ahead to the next depot site. 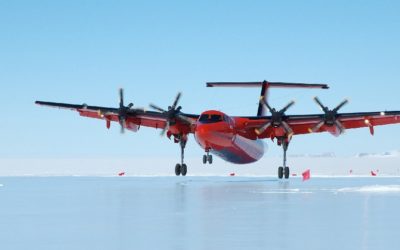 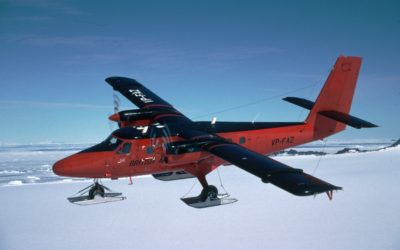