A British Antarctic Survey (BAS) team has just returned from a three-week science cruise with National Geographic on board the RRS James Clark Ross around Ascension Island’s seamounts. This five-part blog, today by marine biologist Ali Massey, provides an insight into the vital role of scientific research in informing conservation policy.

The voyage on the RRS James Clark Ross from Recife to the seamounts around Ascension Island in the mid Atlantic was low stress as far as getting set up, as we had three days of great weather: sunshine, moderate winds and moderate seas.  The sea is the deep lustrous blue that calls out to the diver in all of us and the temperature of the water was 27°C on the top 100m – about the same as the air temperature. If the opportunity arose that we could stop the ship and take a dip I’m sure we would all have taken up the opportunity.

That was then, but this is now.  The first hints that all is not quite as peaceful down below is the school of 40 or more flying fish simultaneously leaping and taking flight off the port bow. Dolphins? We have witnessed dolphins rounding up flying fish into the hull of the ship in the past, but dolphins are easily spotted as they regularly surface to take a breath.  Perhaps tuna or some other large game fish such as marlin are about?  My mind works back to my last expedition to Ascension Island and the large hammer head shark we watched slowly swimming by the ship., and the more recent attack of a swimmer by a Galapagos shark at one of the few swimming beaches on the island – the one I swam at last time I was there.

At the Grattan seamount we deploy several impressive camera systems: one is an array of 10 GoPro cameras set up on five floats with bait to film these larger fish close to the surface.  Another is a space aged globe of technological wonder that has survived the crushing depths of the Mariana trench – the deepest place on earth! We also have our own bespoke SUCs camera lander designed specifically to take high resolution pictures of the sea floor up to 1000m deep so we can build up an accurate picture of the types and numbers of animals living down there.

Mike spends a lot of time in the dry lab programming his high tech drop-cameras for each of the 10 hour missions they conduct every day. They drop down to a pre programmed depth then hover, slowly spinning back and forth, just above the sea floor where they film anything that swims past.  When their time is up they pop up to the surface and send a signal to the ship so they can be located and brought back on board.  In the lounge Mike flicks through the footage and among the video of hundreds of eels, parrot fish, crabs and coral, two large six gill sharks glide in to view.  This fascinates our expedition leader, Paul Rose, who has himself had shared intimate moments with these very large deep sea sharks in the Mediterranean.

During the night it is our time to deploy the BAS Survey Shelf Underwater Camera System.  The depth on the top of the Grattan Seamount is only 70 m, making this underwater volcano 2430m tall from base to summit – larger than any of the peaks in Britain.  Before it even reaches the sea floor large grey shapes flash across the screen of the live feed.  Sharks! And lots of them. We are radioed up from the deck operation team that they are on the surface too and we spot several silky sharks between 1.2 and 1.5m long swimming around the cable in the pool of light shining out from deck.  One has a nibble on the very expensive and quite delicate fiber optic cable that feeds the images and instructions up and down the camera cable.  Luckily it doesn’t appear to be palatable and the sharks continue monitoring the activity in the water and, it appears, on the deck as they have brief spurts of speed as the turn sideways to peer at the ship.

This is all great news for Nigel, our shark expert, who has now transferred to the smaller fishing vessel “Extractor” working along side us as his aim is to catch these sharks and put small tags on them so that once they are released he can watch where they go and after a period of time understand more of their behavior.

Today the azure seas still stir the diver in me, but I am happy to watch from the deck now that I have seen first hand the considerable shark presence of the Grattan Seamounts.

The CTD (standing for Conductivity, Temperature and Depth) is an oceanographic instrument used to map different properties of the water column. Conductivity is a measure of the salinity (or ‘saltiness’) of the water. The CTD on board the JCR also has an oxygen sensor and a fluorometer. Fluorescence gives an indication of the amount of chlorophyll (a green pigment needed for photosynthesis) and therefore phytoplankton in the water. Phytoplankton are the ocean’s primary producers; microscopic algae that form the vital base of the marine food web. The way in which these properties change over depth can tell marine scientists a huge amount about both the physical and biological processes going on in that particular area of the ocean.

The CTD casts we have taken in the region of the seamounts show us that the surface waters from 0m to around 80m deep are really stable. In this region water temperature remained around 27oC; oxygen, salinity and chlorophyll also stayed relatively constant.

Between 80m and 180m depth the temperature rapidly dropped to 10oC with the salinity also decreasing. Increased evaporation in the warm surface waters results in a higher salinity in the top layers. Once the CTD reached 400-500m the temperature remained between 4-8o­C and changed very little with any further increase in depth. These deep water layers can span entire oceans allowing deep-water animals to live and move across a wide area whilst experiencing little change in these environmental conditions.

The results from the CTD casts at Harris-Stewart and Grattan have been fairly similar, but the interesting point to note is that whilst the chlorophyll maximum was at 80-100m, the summits of the seamounts have been at 250m (Harris-Stewart) and 90m (Grattan) below the surface. This means that the top of Grattan lies right in amongst the rich phytoplankton layer giving animals living on the summit of the seamount direct access to the primary food source.

Animals living on the summit of Harris-Stewart have to feed on zooplankton (microscopic marine animals which graze on the phytoplankton during the night and migrate downwards during the daytime to avoid predators such as fish) and marine snow (dead phytoplankton, zooplankton and any other decaying material which eventually falls to the seabed) a food source which is likely to be less abundant.

So, animals at Grattan feed directly on the food that occupies the same level of the water column as them, imagine it as eating vegetables straight from your own garden – easy to eat whenever you need them; whilst the Harris-Stewart animals wait on the virtual ‘pizza delivery guy’ who may take a long time to arrive or occasionally get the wrong address!

Consequently, the marine life we saw with the SUCS camera system was incredibly abundant on Grattan with corals, fish, seastars, crabs and fireworms covering much of the rocky areas of seabed. On Harris-Stewart the marine life remained varied with many different species but less abundant.

The height of the seamount relative to the sea surface plays an important role in shaping their ecosystems; the different habitats and the types and densities of the marine-life found amongst them. One seamount is therefore very different to the next and we wonder what surprises the ‘un-named’ seamount will reveal… 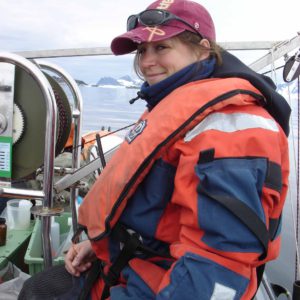