The RRS Shackleton was in service with the Falkland Islands Dependencies Survey (FIDS)/British Antarctic Survey (BAS) from 1955/56 until 1968/69. Her role was primarily that of a survey and science vessel, supporting marine geophysics programmes. Originally named the Arendal, she was built in 1954 at Sölvesborg in Sweden for Arendals Dampskibsselskab, Norway. In Aug 1955, she was bought by FIDS for £230,000, and further strengthened for work in sea ice. She was renamed RRS Shackleton by Mrs Arthur, wife of the then Governor of the Falkland Islands and Dependencies, in a ceremony at Southampton on 19 Dec 1955.

On 29 Nov 1957, having completed the relief of Base H, Signy Island, the vessel was north of Coronation Island, South Orkney Islands, when she collided with heavy pack ice and was holed in two places below the waterline. Number 2 hold filled with water but using the ship’s pumps and temporary repairs she was stabilised and, escorted by the whaling ship Southern Venturer and HMS Protector, put into Stromness Bay, South Georgia, for repair.

From 1969, the Shackleton was operated by BAS’s parent body, NERC (Natural Environment Research Council) as an oceanographic research vessel. Under NERC ownership she carried out geophysical and marine geology cruises in Antarctic waters until being withdrawn from service in May 1983 and sold.

The Shackleton was renamed Geotek Beta in 1983, and Profiler in 1984. In 1992 she was reconfigured to operate as a soils and high resolution seismic survey vessel, operated by Gardline Shipping Limited of Great Yarmouth. Renamed Sea Profiler in 1992, she is believed to have still been operational in 2009. Her last port of call was Hull in 2010 and she was reportedly scrapped the following year. 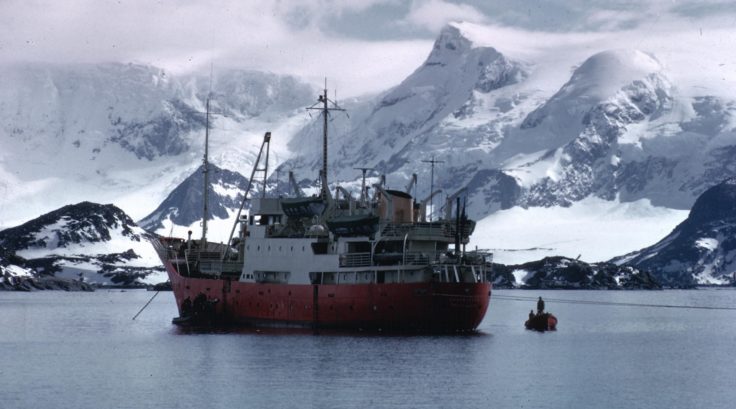