The second John Biscoe was built by Fleming and Ferguson Ltd, Paisley, for the Falkland Island Dependencies Survey (FIDS). Launched in 1956, passengers on her maiden voyage included HRH Prince Philip, the Duke of Edinburgh, visiting some of the FIDS research stations during the 1956/57 season.

Initially the ship operated as a cargo vessel to resupply FIDS – later BAS – research stations. Increasingly she supported hydrographic and marine biology surveys, and geological landings. Following a major refit in 1979, her role became that of a platform for marine science, particularly the Offshore Biology Programme. Modifications included replacement of the main engines, new laboratories, winches for sampling down to 3000 metres, a gantry for trawling and bow thruster to enable the ship to maintain station in strong winds and currents. New instrumentation included a satellite navigation system, echo-sounder and echo-integrator and salinity-temperature-depth profiler.

The ship’s original motor launch was destroyed in rough seas off Tristan da Cuhna on 11 Nov 1957. A replacement was built by John I. Thorneycroft and Co Ltd in 1958. Initially open-decked, a cabin and decking were added for use in hydrographic survey work.

During the 1985/86 season, the ship became trapped in sea ice near Wiencke Island. Crew were temporarily evacuated to the RV Polar Duke and Palmer station from 18-20 Nov 1985, when she was finally freed from the ice by the West German vessel, Polarstern.

Named after the English 19th-century sea captain, John Biscoe (1794-1843). In 1830, Biscoe was given command of the Tula by Enderby Brothers of London. Combining exploration with the search for new sealing grounds, Biscoe circumnavigated the Antarctic continent, discovering Enderby Land in 1831, Adelaide Island and the Biscoe Islands in 1832, as well as part of the west coast of the Antarctic Peninsula, naming it Graham’s Land (now Graham Coast).

The John Biscoe was sold on 30 Sept 1992 to Fayza Shipping Tartous, renamed the MV Fayza Express and re–registered in Honduras. She continued to operate as a a cargo and passenger vessel out of Limassol, Cyprus. According to the Lloyds Register of Shipping she was broken up in Turkey, Mar 2004.

The John Biscoe‘s motor launch, sometimes referred to as the ‘Biscoe Kid’, was transferred to the RRS James Clark Ross and continued to be used until around 2002. She was then sold and subsequently bought by the Eyemouth Harbour Trust, Northumberland, which maintains a collection of historic small boats. She took part in the Queen’s Diamond Jubilee Thames Pageant on 3 Jun 2012. 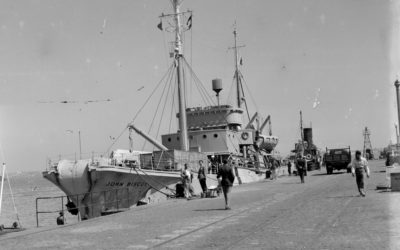