The MV Pretext was the first ship to be purchased by the Falkland Islands Dependencies Survey (FIDS) in Aug 1947 for approximately $75,000. Previous to this, the vessel had been used as a net-laying ship during the Second World War. Renamed the MV John Biscoe, the ship was used by FIDS as a supply vessel to re-stock bases and exchange personnel. In 1953, the John Biscoe was awarded the status of RRS (Royal Research Ship). On arriving back in Southampton on 12 Jun 1956, she was replaced with a new purpose-built vessel, also named the John Biscoe. To avoid confusion with the new ship, the original Biscoe was renamed Pretext from 24 April 1956.

Named after the English 19th-century sea captain, John Biscoe (1794-1843). In 1830, Biscoe was given command of the Tula by Enderby Brothers of London. Combining exploration with the search for new sealing grounds, Biscoe circumnavigated the Antarctic continent, discovering Enderby Land in 1831, Adelaide Island and the Biscoe Islands in 1832, as well as part of the west coast of the Antarctic Peninsula, naming it Graham’s Land (now Graham Coast).

The RRS John Biscoe was sold to the New Zealand Government for £12,000, who took ownership in Aug 1956. She was renamed the HMNZ Endeavour and used as a support vessel during the New Zealand contribution to the Commonwealth Trans-Antarctic Expedition. 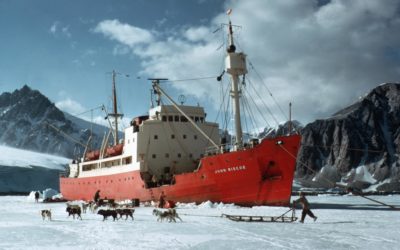