The Antarctic is a pivotal part of the Earth’s climate system and a sensitive barometer of environmental change. Although remote and inhospitable, Antarctica is Earth’s most powerful natural laboratory. Understanding how the Antarctic is responding to current climate change – and what the continent was like in the past – is essential if scientists are to be able to more accurately predict future climate change and provide accurate information to politicians and policy makers.

British Antarctic Survey (BAS) has for the past 60 years been responsible for most of the UK’s scientific research in Antarctica and its current five-year research strategy is focussed on deepening our understanding of climate change.

Antarctic ice cores reveal the clearest link between levels of greenhouse gases in the atmosphere and the Earth’s temperature. They show that the temperature of the climate and the levels of greenhouse gases are intimately linked. In 2004, ice core scientists at BAS working together with colleagues from other European nations successfully extracted a three-kilometre ice core from the Antarctic. This core contains a record of the Earth’s climate stretching back 800,000 years – giving us by far the oldest continuous climate record yet obtained from ice cores.

BAS geologists can look back even further in time. By studying Antarctic rocks and sediments from the sea and lake beds, they are able to get a picture of what the Antarctic was like millions of years ago when the continent was warm and supported plants and animals such as dinosaurs. Understanding how the ice sheets that currently cover the continent developed and how they have receded in the past is essential if we are to be able to predict how those ice sheets will behave in a warmer world.

Much of BAS science is done on the Antarctic Peninsula – one of the fastest warming parts of the planet. BAS glaciologists are also studying the West Antarctic Ice Sheet, parts of which are thinning rapidly. Their work is crucial to understanding whether this thinning could signal the start of the ice sheet’s collapse, an event that would cause sea levels to rise much more than currently predicted.

On sea as well as on land, BAS scientists are investigating climate change. As the waters warm around Antarctica, ecologists at BAS are looking at how penguins, seals and the other species that make up one of the world’s largest marine ecosystems are responding.

Because the causes and effects of climate change are extraordinarily complex, assembling all the pieces of the climate change jigsaw is a huge challenge. By conducting world-class science in the Antarctic, BAS is making a significant contribution to meeting this challenge.

Antarctic climate change – why it matters to us 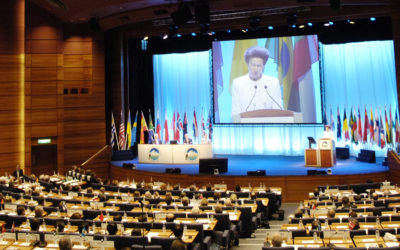