The commercial fishery for Antarctic krill (Euphausia superba) operates in the southwest Atlantic, in particular along the west Antarctic Peninsula, and over the shelf breaks of the South Shetland Islands, South Orkney Islands, and at South Georgia [1]. Krill is an important dietary item for many species of predator in the Southern Ocean, including fish, squid, penguins, flying seabirds, seals and baleen whales [2] and the potential for competition with these predators is one of the major considerations in the management of the krill fishery [3]. The international Commission for the Conservation of Antarctic Marine Living Resources (CCAMLR) manages the krill fishery, while the Government of South Georgia & South Sandwich Islands (GSGSSI) imposes more stringent management regulations under its own fisheries and wildlife legislation including the SGSSI Marine Protected Area [4].

There has been no krill fishing at the South Sandwich Islands since 1992. The SGSSI MPA includes closed areas that prohibit pelagic commercial fishing within 50 km of the islands. The closed areas amount to 51,000 km2, as a precautionary measure to mitigate any potential competition between future krill fishing activity and the large numbers of krill-dependent chinstrap penguin (Pygoscelis antarcticus) that breed on the islands [10].

The krill fishery is also restricted within the SGSSI MPA to operate only within the winter period between May and September. This summer closure avoids competition with the many krill-eating seabirds and marine mammals during the breeding season [4]. The international fleet therefore only operates during winter when the spread of sea ice prevents access to preferred fishing grounds further south [5]. Winter fishing should not lead to any potential for competition with krill-dependent predators, as they are not constrained by the need to provision offspring and are away from their breeding sites during this period.

Although the fishery should not lead to any competition with chinstrap penguins during the summer period, the degree of spatial overlap and how this changes over the course of the summer has yet to be determined as no tracking has been undertaken from the South Sandwich Islands. This project therefore aims to fill this key information gap and provide advice for the Second SGSSI MPA Review, earmarked for 2022.

In early January 2020 we equipped 20 chinstrap penguins with Sirtrack Kiwisat (202 K2G 273A) satellite transmitters at breeding sites on Saunders Island. Only breeding birds have been instrumented, and only where both partners were present at the nest. The Kiwisat tags relay positions via the ARGOS system for around 70 days so there is no need to recapture the birds to obtain data; an important requirement since boat landings on the South Sandwich Islands can be difficult, especially in the rough seas that often occur around the islands. Each tracker will be lost at the end of summer, when the penguins undergo their annual moult. The positions from each tracked penguin are shown on the following map.

Click on a track to find out how far the bird has gone from the initial deployment location.

This study extends analyses that we and others have carried out previously on chinstrap penguins at the west Antarctic Peninsula, and at the South Shetland Islands and South Orkney Islands [6] [7] [9].

In addition to deployment of the trackers, each penguin was measured to provide information about mass and gender. Fresh scats (penguin poo) were also collected to examine diet composition. We use a combination of stable isotope analysis to determine the proportions of fish and crustacea in the diet, and genetic fingerprinting to provide more details on key prey types being eaten [8]. We will use all data to confirm that the 50 km coastal buffers provide adequate protection during the summer.

Provide information on feeding areas used by chinstrap penguins in the South Sandwich Islands during the summer breeding period. 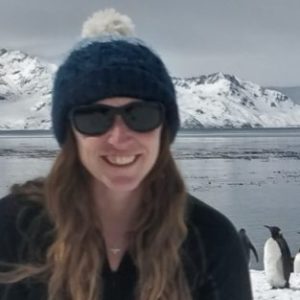