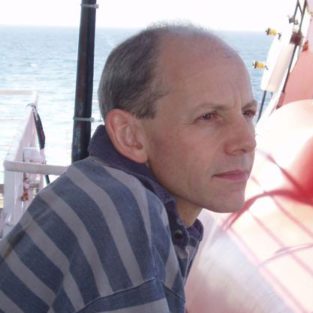 Based at the Scottish Association for Marine Science, my research has focused predominantly on the ecology of marine micro-organisms in polar, temperate and tropical waters, and their role in carbon and energy flow. This has included fundamental studies of the diversity, structure and function of protozoan communities, and their micro-algal and bacterial prey, in plankton environments and sea-ice.

I have also undertaken applied studies of the impact of aquaculture activities on planktonic ecosystems, microbial-fish larvae interactions in aquaculture hatchery environments, and the production of biofuels from micro-algae.

I have conducted field studies in the Atlantic, Indian and Southern Oceans, and in UK, Norwegian, Pakistani, Arctic and Antarctic coastal waters. In summers 2008, 2010 and 2012 I led the NERC-funded ICECHASER 1, ICECHASER 2 and UK Ocean Acidification Arctic research cruises to the Greenland, Norwegian and Barents Seas.

I am currently lead scientist for the design and construction of the UK’s new polar research vessel, RRS Sir David Attenborough.