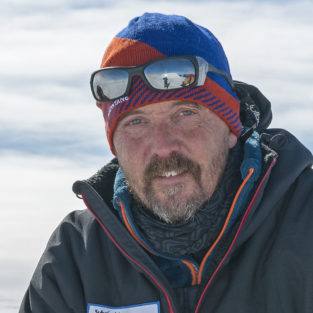 Pete is the BAS Senior Creative Services Manager. He’s also a Cinematographer/Photographer, UAV pilot and manages the Image Collection at the British Antarctic Survey. Working both with scientists and communications specialists he provides visual solutions that both enable and help communicate BAS Science.

His work has been seen in TV News reports & documentaries around the world and in most, if not all, national and international broadsheet newspapers.

Pete also both leads and plays an active involvement in many science and arts collaborations include the BAFTA winning Antarctic Waves, an ongoing DATA AS ART project, and an exciting/immersive ‘Virtual Antarctica’ project. The latest projects under development being Polar Zero, a science/art/engineering collaboration with the Royal College of Art and Arup, for COP26.

Pete has traveled to the Polar Regions supporting British Science more than a dozen times during his 28 years working for British Antarctic Survey. His experiences now used to advised some of the worlds leading directors & camera operators, as well as government and law enforcement officers on working and filming in challenging environments.

Whilst supporting science across BAS, Pete has a passion for science-art collaborations and virtual environments. As they take BAS science, engineering and operations to new, exciting and wider audiences.

Notes from a cold climate – Antarctic Symphony (Symphony No.8)

A creative record & diaries of Sir Peter Maxwell Davies, recorded during his journey to Antarctica to create an Antarctic Symphony in the footsteps of Vaughan Williams original Symphony written following Scott’s expeditions. Creative imagery by Pete Bucktrout, photographer and cameraman at the British Antarctic Survey.

I’m lucky enough to be involved in projects across the whole spectrum of BAS science, engineering, and logistics, providing image and visual solutions for our scientific and corporate communications