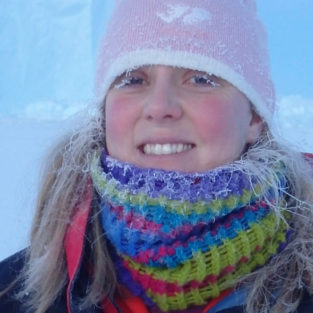 I started my career as a marine biologist working in marine protected areas and then went on to work with The British Antarctic Survey. Since 2008 I have worked in both the Antarctic and the Arctic as a polar benthic marine biologist. I work on the effect of climate change on marine invertebrates that inhabit the seafloor. I have spent four winters in Antarctica, a total of four and a half years living on the Western Antarctic Peninsula and over 600 Antarctic dives at one of The British Antarctic Research bases, Rothera Research Station. I have been part of a large NERC funded cross disciplinary project looking at the changing Arctic Oceans and the effect on benthic marine biodiversity. I have a PhD on the biodiversity of Antarctic hard rock communities. I have carried out benthic marine research using SCUBA and from large ship based research vessels. I have been extremely fortunate in having the opportunity to dive in human submersibles along the Antarctic Peninsula examining marine communities down to 300m.

Ten years later and I am now going back to working on marine protected communities as part of a large EU funded project (MarPAMM) and will be based at Ulster University on the north coast of Ireland. I will be carrying out research on the quantification of benthic biodiversity within seven cross boarder marine protected areas in Scotland and Ireland. I will still have ties to Antarctica and the Arctic as I work alongside many colleges based at The British Antarctic Survey and through research publications.

NERC Changing Arctic Oceans Project (ChAOS)
The Arctic Ocean accounts for up to 14% of global atmospheric CO2 uptake. But only the carbon that is deposited at, and buried into, the Arctic seafloor removes it from the ocean-atmosphere system over long timescales. Hence, the Arctic seafloor, with its complex biological and biogeochemical processes, is inextricably involved in this crucial process of carbon sequestration. However, little is known about how the Arctic seafloor environment is responding to surface ocean changes. The ChAOS project will close this knowledge gap by studying an Arctic shelf seafloor system undergoing rapid environmental change using a multi-disciplinary approach.
The ChAOS project aims to better understand how changes in the Arctic Ocean sea ice cover and water mass distribution will affect biological and biogeochemical processes at the seabed. The seafloor is a highly dynamic environment that hosts a wide variety of biota, and plays a crucial role in carbon and nutrient cycling and burial. ChAOS will focus its research activities on the central and northern Barents Sea, a part of the Arctic shelf system that is strongly affected by modern climate change, and of interest to the hydrocarbon and fisheries industries.
However, changes to certain key components of Arctic ecosystems, such as benthic faunal assemblages or the extent of carbon and nutrient burial, are often ignored in political and scientific discussions of a changing Arctic Ocean. The Arctic Ocean seafloor hosts a diverse and productive benthic ecosystem that is a crucial component of an intimately coupled benthic-pelagic system. The relative importance of benthic organisms in modulating sequestration, transformation and storage of bio-essential nutrients and carbon across the Arctic Ocean is still poorly constrained.

Antarctic seabed carbon capture change project (ASCCC)
The principal purpose of the ASCCC Project is to investigate and understand the role of polar and subpolar seabeds in the carbon cycle, particularly in response to climate change.

Background – The continental shelves along polar continental margins and archipelagos are wide, deep and rich in life. Most species known from polar waters live on the seabed (benthos) and recently it has been discovered that they play an important, and increasing, role in the carbon cycle.

Benthos commonly comprise echinoderms (sea stars, brittlestars, sea ucrhins), molluscs (clams & snails), corals, sponges, crustaceans, bryozoans (sea mosses) and many other animal types. They eat plankton (such as microscopic plants and animals). Carbon is transported through the system by being fixed in photosynthesis by the tiny algae, which are eaten by benthos, and then buried when the benthic animals die.

We call this ‘carbon immobilization’ (net annual carbon accumulation) and our main aim is to attempt to measure how much carbon is held per unit area of the seabed per year, and how this varies in time and space. To date we have focussed mainly on one group of animals (bryozoans) because they are common, easy to identify, sessile (they don’t move) and have annual growth lines in their skeletons (like tree rings) – making them easier to age.