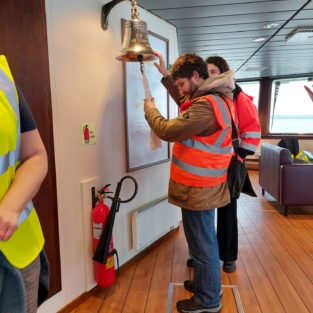 After a career in journalism that spanned areas as far apart and diverse as South Africa, Guernsey, and work in the European Parliament (no nothing to brag about), David is now a member of the British Antarctic Survey joining their thrust to reach Net Zero by 2040.

He can be found walking through the corridors of the Cambridge building with his long cane or feverishly typing up stories of Net zero achievements. Or simply meeting with managers to ensure the project is running smoothly. While reading reports on his laptop and Braille Tablet, he dreams of going South and experiencing the polar regions. But failing that, he is determined to engage with staff and support the Net Zero team to ensure we become a carbon neutral organisation and blaze a trail for other places in the UK and beyond.

David said: “I’ve always had a fascination for the polar regions and it’s amazing to be here in this role. BAS has an amazing environment and atmosphere I’ve not found anywhere else. Everyone has been incredibly supportive and helpful to a blind and partially deaf newcomer with bags of enthusiasm but who is still finding his way.

When not working at the British Antarctic Survey, David enjoys reading, writing and tall ship sailing. He loves to bake bread in the kitchen and do the washing up. If you want to know more, pop down to the Comms Office and the Aurora and ask him for a story.

All aboard: RRS Sir David Attenborough is about to depart
Blog 3 December, 2022